Is Leadership A Preserve Of The Elderly In Ghana? 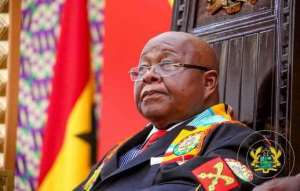 A Ghanaian lawmaker has observed that the reservation of leadership role to the elderly in Ghana is a challenging issue and must be addressed.

Ernest Henry Norgbey Member of Parliament (MP) for Ashaiman who made the observation on the floor of the House on Tuesday 2, 2019, emphasised the need to give space in the political arena for the county's youth.

What's the way forward?
The legislator is rallying support from both sides of the political divide in order to amend any clause (s) that acts as roadblock.And he's also trying to persuade the Speaker to buy into his viewpoint on the subject.

He noted that some constitutional specifications as 21 years for one to be elected to Parliament and 40 years to be President limits the participation of the youth in politics.

"When people are limited by constitutional demarcation it soon begins to sound as normal and acceptable and further gains legitimacy in the political rhetoric," he underscored.

And he couldn't state it better.
The inevitable question however is:
What are we waiting for when birds are making their own beds and monkeys are already biking?

But, all in all, I must commend all the MPs that added their voice to this call. I think it's a subject that many perhaps have been musing on over the years till now. My only fear though, is how the honourable members deal with red tape and bureaucracy.

Here's something to consider:
If 46.5 per cent of the Ghanaian population are below the age of 24, according to the 2010 census, then isn't it prudent to give the youth the bigger share of the cake rather than hand them bits and pieces?

The Constitution
According to chapter 8 Article 62 of the 1992 Constitution of Ghana, a person shall not be qualified for election as the President of Ghana unless: (a) s/he has attained the age of 40 years.

So, this is why Mr. Norgbey and his colleagues in parliament are pushing for amendment.

Remember, this comes nearly thirty years after the passage of the 1992 Constitution.

If they succeed, it will reduce or scale down the age eligibility to enable young men and women seek the highest office of the land.

The Ghanaian youth have more or more less become a buwalk in contemporary politics. They've been used time and again by politicians to achieve their political interest.

“More so, if an individual of 21 is old enough to make laws, then he should be able enough to implement these laws. Why should an immature person make laws for the mature one to obey and implement?"

“Mr Speaker, the increasing violence is as a result of the idle involvement in the political process.The manipulation of the youth during electioneering creates security challenges for the nation," he claimed.

Is that argument wholly true?
That's Post Hoc fallacy and I tend to disagree on its premise and conclusion. I think it's wrong for one to conclude that the increasing violence in the country is as a result of the idle involvement of the youth into politics.The reason is, this fallacy assumes that correlation equals causation or in other words, if one event predicts another event it must have also caused the event.

So even though that could be a factor, but merely assuming that violence increased because of youth apathy in politics is wrong.

Mr. Norgbey urged his fellow legislators to act to review the laws, saying, "Mr Speaker, I challenge you and all members of this House to allow the youth to participate fully.”

In her contribution Ursula Owusu-Ekuful, Minister of Communications and MP for Ablekuma West Constituency, has called for the demonetization of politics. Mrs Owusu-Ekufu suggests that aspiring MPs who are 35 and below be granted a certain percentage or quota.

She also argues that it is not enough for Ghana to pride itself as the country with the youngest MP in Africa, but go beyond that to have more of the youth in parliament and other higher levels of political office.

The author has 437 publications published on Modern Ghana.