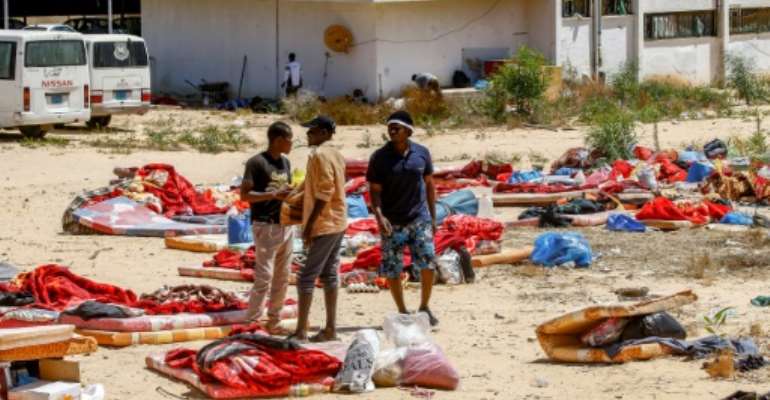 The International Organization for Migration says aound 300 migrants are still being held in a Libyan detention centre just days after aan air strike there killed 44 migrants. By Mahmud TURKIA (AFP)

Hundreds of migrants were still held Thursday in a centre days after it was hit by an air strike that killed 44 people, amid outrage over the plight of those still trapped in Libya.

The announcement by a UN agency came as the internationally recognised government based in the capital Tripoli said it is considering closing migrant detention centres in the North African country.

The Government of National Accord "is currently reviewing the closure of shelters and the release of illegal migrants to ensure their safety and security," GNA interior minister Fathi Bachagha said.

The GNA does not have the capacity to protect migrants from air raids, Bachagha said during a meeting with Maria do Valle Ribeiro, assistant to the UN special envoy to Libya, according to a statement from the ministry.

At least 44 migrants were killed and more than 130 wounded Tuesday night in the air strike that targeted a hangar in a detention centre in the Tripoli suburb of Tajoura.

On Thursday, around 300 migrants were still being held there, the International Organization for Migration said.

Of the 600 migrants that were in the centre, "300 were still there" Thursday and receiving humanitarian assistance from the IOM, Safa Msehli, communications director for the UN agency in Libya, told AFP. 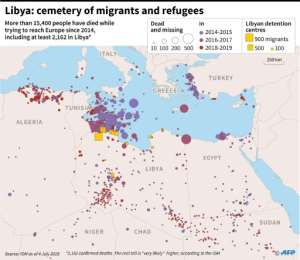 Map locating deaths of migrants and refugees since 2014 in the eastern Mediterannean, with a zoom on Libya, according to the International Organization of Migration.. By Thomas SAINT-CRICQ (AFP)

Msehli was unable to confirm reports that dozens of migrants had fled on Tuesday night after the raid in the Tripoli suburb of Tajoura which also left 130 wounded.

According to the UN's humanitarian office OCHA quoting survivors, guards at the centre fired on migrants trying to flee after the first air strike, causing no casualties.

But the IOM said in a statement that its teams had "located" and transferred to hospital "a group of injured migrants who left Tajoura after the attack in the surrounding neighbourhood".

"Innocent lives were lost in the attack on Tuesday night, and immediate action is needed from all sides," the IOM's Libya chief of mission, Othman Belbeisi, said in the statement.

The GNA and its arch-foe strongman Khalifa Haftar traded blame for the deadly assault which has sparked an international outcry and calls for an independent probe.

But despite a storm of outrage, a divided UN Security Council failed to unanimously condemn the attack in an emergency meeting Wednesday after the United States did not endorse a proposed statement. 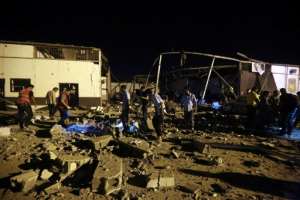 Emergency workers recover bodies after an air strike that targeted a migrant centre in a suburb of the Libyan capital and killed dozens. By Mahmud TURKIA (AFP)

Migrants from Algeria, Morocco, Sudan, Somalia and Mauritania as well as other African nations were among the victims, Amin al-Hachmi, a spokesperson for the GNA health ministry, told AFP.

The majority of migrants at the centre in Tajoura, a suburb east of the capital Tripoli, were from Eritrea and Sudan.

Two of the five hangars that made up the centre were hit by the air strike, while "hangar number 3", which housed more than 120 migrants, took a direct hit.

According to the IOM, of the more than 600 migrants detained in Tajoura, 187 were registered with its "Humanitarian Voluntary Return" programme, which helps migrants go back to their home countries.

"The IOM continues to call for an end to the arbitrary detention and reminds all parties that civilians are not a target," it said in a statement. 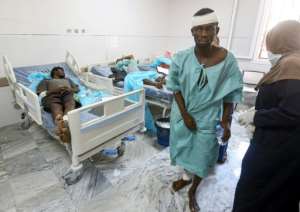 Some 3,300 migrants are still detained in and around the Libyan capital in centres "considered at-risk" in light of the fighting between the opposing forces of Hafter and the GNA, the IOM added.

Rights groups say migrants face horrifying abuses in Libya, which remains prey to a multitude of militias vying for control of the oil-rich country.

Their situation has worsened since Haftar -- supported by the United Arab Emirates, Egypt and Saudi Arabia -- launched on April 4 an offensive to conquer Tripoli, where the Turkey-backed GNA is based.

UN agencies and humanitarian organisations repeat regularly their opposition to the return of migrants arrested at sea to Libya, where they find themselves in "arbitrary detention" or at the mercy of militias.

The North African country that has been wracked by chaos since the 2011 uprising against dictator Moamer Kadhafi.