The Era In Which The Truth No Longer Matters 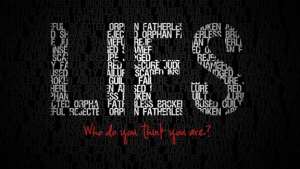 Sir Winston Churchill, the British politician, historian, and journalist, who led the United Kingdom during the Second World War once said: A lie gets halfway around the world before the truth has a chance to get its pants on.”

And about a politician, he said: “The politician must be able to predict what will happen tomorrow, next month and next year, and then have the ability to explain why it didn't happen."

The above quote simply indicates that people believe in lies than the truth and the bottom reveals how politicians are linked to lies or lie links to politicians. We need to admit that we are living in an era the truth is no longer important.

Therefore, why adults teaching children not to lie have become chronic liars themselves? If there is something that should really bother us, certainly, they must be lies and falsehood, both are capable of destroying everything.

The saddest aspect of hypocrisy and deception is that they often do not come from our enemies or from unknown people but from politicians, leaders the people trust to vote for them and institutions people are familiar with because of their immense services to the general public.

Let’s begin with the media, including the CNN and the BBC. They have a lot of admirers worldwide, but there are other people who wouldn’t even listen to the two media, simply because they are known to be deceptive and untruthful. Even the American leader, Donald Trump, called the CNN fake news.

Imagine, both the CNN and the BBC claim they have qualified health journalists, but ever since Aids and Ebola struck humanity, both have failed to tell the world about the true origin of the two deadly man-made biological weapons.

Till now, they continue to deceive the general public that Aids originate from Africa and bats is said to be responsible for the spread of Ebola.

The book, ‘Aids, Origin, Spread, And Healing,’ by the German medical doctor, Wolff Geisler, reveals all the medical crimes involving the World Health Organization in Africa. They can never deny that. If the doctor is a liar, he is now a columnist at ModernGhana news, they can challenge him.

However, since independent health officials, scientists and famous people, including Wangari Maathai, the renowned Kenyan social, environmental, political activist and the first African woman to win the Nobel The prize, proved the World Health Organization wrong and accused the US government of a clandestine crime, both WHO and CDC, have refused to remove the false medical information they have provided about Aids and Ebola from their websites to avoid shame.

In reality, I don’t understand why the International Criminal Court still exists without shutting down its doors, when they have never talked about crimes by foreign powers, which have taken place on the continent of Africa, yet they look for African leaders accused of war crimes.

The human tendency is to confuse what we believe in, which for us is a reality, with the truth. If it makes sense it must be true, on the contrary, one does not believe in the truth because it would require us to change something.

People don’t believe in the truth any longer because they are helpless and have no means to help themselves. Africa can’t accuse the World Health Organization of medical crimes because when an epidemic hits the continent, thousands will die if they refuse to answer the call to arrest the situation.

Africans can't accuse the US government of Aids and Ebola because thousands are suffering, therefore, need a visa to leave the continent, meanwhile, the US government is deporting illegal immigrants, including hundreds of Africans. Who knows it feels it, probably, I will do the same if I am in Africa.

African leaders, can't speak against the ICC. Only a few have denounced the bias activities of the International Criminal Court because nobody wants ICC to accuse him of political crime.

This is how poor Africans are trapped without justice, and since lies have gained a solid foundation than the truth, Africa will not only get justice it deserves but the continent will continue to be poorer and poorer because of the type of greedy leaders we have in Africa.

We've Not Backtracked; We're Still Opposed To Intransigent, ...
1 hour ago