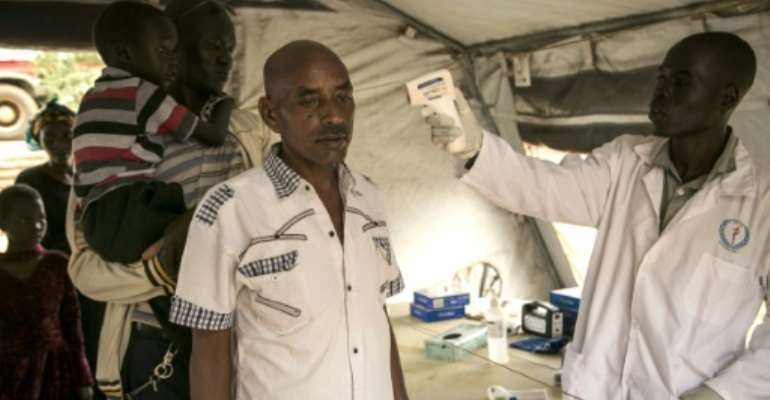 Checks on travellers at South Sudan's border with Uganda after three cases of Ebola were reported there last month. A new case has been reported just across the border in DR Congo, where an Ebola epidemic broke out last August. By AKUOT CHOL (AFP)

South Sudan has stepped up surveillance along its porous southern border after an Ebola case was detected just inside DR Congo, an health official in Juba told AFP Wednesday.

The case of the deadly virus was confirmed in Ariwara, in Congo's northeastern Ituri province, just 70 kilometres (43 miles) from the frontier with Yei River State in South Sudan.

It is the closest Ebola is known to have come to South Sudan since a major outbreak began in Congo last August.

Dr Pinyi Nyimol, the director general of South Sudan's Disease Control and Emergency Response Centre, said a team of reinforcements had been sent to the region to bolster surveillance after the case was confirmed.

"We are very worried because it is coming nearer, and people are on the move so contact (with Ebola) could cross to South Sudan," he told AFP.

There are screening centres at border crossings in high-risk areas and an Ebola treatment unit and laboratory in the capital Juba, Nyimol said.

But the world's youngest country is considered particularly vulnerable to the notorious virus.

Years of ruinous civil war have left its health system in tatters.

The border with the Democratic Republic of Congo has many unofficial crossing points, posing challenges for detection.

Fighting in and around Yei River State since September has also driven nearly 20,000 civilians into DR Congo and Uganda, both countries that have detected Ebola.

The outbreak in the eastern Congo provinces of North Kivu and Ituri has already claimed more than 1,500 lives since August.

Two people also died in Uganda in June after a family returned from eastern Congo where they buried an Ebola-stricken relative.

Ebola spreads among humans through close contact with the blood, body fluids, secretions or organs of an infected person, or objects contaminated by such fluids.

Voters’ Registration: Everyone Will Be Safe – A/R Minister A...
47 minutes ago