From a lake high in Madagascar, Africa's own caviar 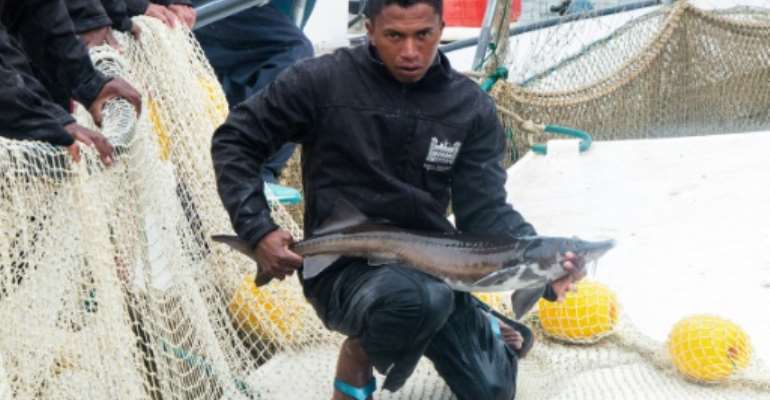 The sturgeon that produce the caviar roe are kept in Lake Mantasoa, perched at an altitude of 1,400 metres east of the capital Antananarivo. By MAMYRAEL (AFP)

Madagascar, renowned for its unique wildlife and vanilla production, has a new claim to fame -- the island nation is Africa's first and only source of caviar.

The business is an unlikely project in a country beset by grinding poverty, but its owners are determined that luxury foods can play a part in improving Madagascar's economy.

"A lot of people laughed at us," says Delphyne Dabezies, the head of Rova Caviar, admitting that the enterprise was a big gamble.

"But we took the time to prove that this is serious. Madagascar caviar is now the only caviar produced in Africa and the Indian Ocean."

The island off the coast of Mozambique is still only a minor player in terms of global production, which is dominated by China, Italy and France -- though producers in the Caspian Sea still boast the most prized caviar, from Beluga sturgeon. 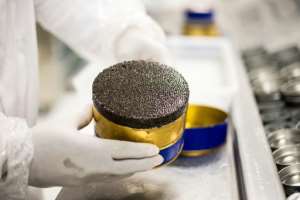 Once it is judged up to standard, the precious output is sold to high-end shops and restaurants on the island and to its neighbours of Mauritius, Seychelles and Reunion. By MAMYRAEL (AFP)

Last year Mozambique produced a tonne of caviar in a world market of about 340 tonnes a year.

But its ambitious promoters hope to soon increase production to five tonnes.

The unusual plan is the brainchild of Dabezies, her husband Christophe and their partner Alexandre Guerrier -- all of them French entrepreneurs based in Madagascar.

"At the time, our business in luxury ready-to-wear clothes had become sustainable, and we were seeking to diversify our activities," Dabezies said. 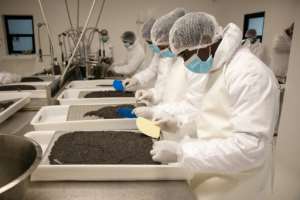 "We are all gourmands, so this idea served our purposes.

"Madagascar has an exceptional environment that produces rare crops such as cocoa, vanilla, organic shrimp and lychees -- we thought we could add caviar."

The sturgeon that produce unfertilised caviar roe are kept in Lake Mantasoa, perched at an altitude of 1,400 metres (46,000 feet) east of the capital Antananarivo.

Training the staff has been a major part of the project.

"I had to learn everything on the job."

Staff member Say Sahemsa, wearing white boots, tells AFP: "You have to take care of the spawn and avoid giving them too much or not enough food, to have the lowest possible mortality rate."

Sturgeon are imported from Russia in the form of fertilised eggs, which hatch in a special nursery facility in Mantasoa. 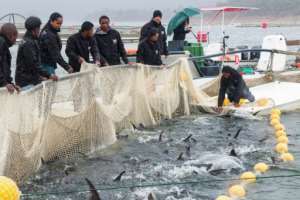 When the sturgeon reach seven grams they are moved to freshwater ponds, and then into large cages in the lake when they weigh 500 grams. By MAMYRAEL (AFP)

When they reach seven grams (a quarter of an ounce), they are moved to freshwater ponds, and then into large cages in the lake when they weigh 500 grams (around a pound).

At 1.5 kilogrammes, the males are killed and only the females are kept on until their eggs are ready.

The process demands patience and skill.

The first imported eggs arrived in Mantasoa in 2013, and the first grams of caviar did not go on sale until June 26, 2017, Madagascar's independence day.

The quality of the harvest depends on the dexterity of one man, 23-year-old Gaston Soavan'i Thomas.

Knife in hand, Thomas has no margin for error as he extracts eggs from the entrails of each sturgeon.

"At first, I was afraid to destroy or contaminate the eggs, but now everything comes automatically," he said. 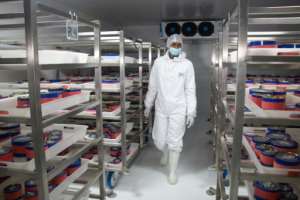 The eggs are kept in a refrigerated room at 0 degrees Celsius. By MAMYRAEL (AFP)

The eggs are kept in a refrigerated room at 0 degrees Celsius (32 degrees Fahrenheit).

Expert taster Georges Heriniaina Andrianjatovo taps each box with a small hammer to detect any air bubbles, which are removed as soon as possible. Colour, taste and smell are all important.

"A good caviar rolls in the mouth and exudes an odour of fresh butter," he says.

Once it is judged up to standard, the precious output is sold to high-end shops and restaurants on the island and to its neighbours of Mauritius, Seychelles and Reunion.

According to Guinness World Records, a kilogramme of the costliest caviar from albino sturgeon off the coast of Iran regularly fetches over $25,000.

"I prefer to serve it in its natural state, with salmon or oysters on ice," he says.