By Kwaku Anane
Listen to article

Residents' of Manhea in the Amasaman Municipality of the Greater Accra Region, are sitting on a time bomb which is ready to explode if the security agencies and other stakeholders do not intervene.

Information gathered by this reporter is that some residents are on their heels to neighboring towns due to tension, fear, and panic within the community over plans to install another Chief of Manhea Zongo in addition to the already installed Zongo Chief who has been there for some years.

The residents' believe that if care is not taking the situation will be unbearable for them the residents' adding that the security agencies must as a matter of urgency intervene by putting a hold on the said installation.

The residents raised an alarm of the impending bloodbath due to today's (June 30, 2019) planned installation.

The current situation within the community, many people believe will not auger well for the resident's and will lead to loss of lives and properties.

According to the residents', the people of Manhea Zongo already have their chief who is performing his duties diligently and will not allow unscrupulous individuals in their selfish interest to jeopardize with the peace they the residents are enjoying by installing another Manhea Zongo chief in the community.

This, he reiterated will create chaos and loss of lives in the community due to the tension that has already engulfed the community since the plans of the installation broke out.

The residents revealed that the Chiefs and elders of Manhea are not aware of the process to install any new Chief of Manhea Zongo which they described as disrespect to their Chief and elders.

This, they appealed to the security agencies to act swiftly, and find a lasting solution to the matter to avoid bloodshed in the community tomorrow.

However, the Chief of Manhea, Nii Ayikortor II and the Greater Accra Council of Zongo Chiefs have called on the Police to as a matter of urgency ensure that the said installation must not come on.

According to the council, the Manhea community already have a Zongo Chief in the person of Sarki Abdul-Kadir Ahmed Abdul-Kadir and he is a member of the Greater Accra Council of Zongo Chiefs.

The council affirms that they stand for peace and tranquility in all the Zongo communities and would not want the said installation of Manhea Zongo Chief to bring chaos and anarchy in the community.

Below are the letters issued by the Manhea Mantse Nii Ayikortor II and the Greater Accra Council of Zongo Chiefs to the Amasaman Police Command and Odorkor Divisional Commander. 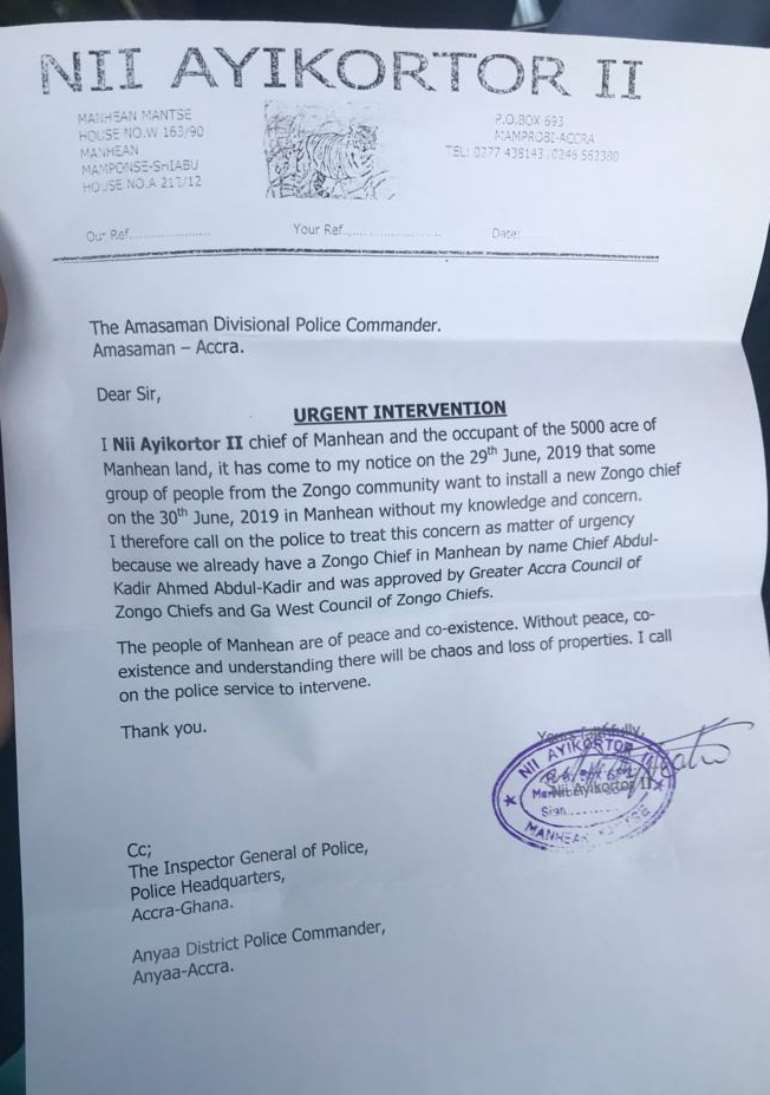 I won’t bow to pressure to make Parliament a ‘rubber stamp o...
30 minutes ago