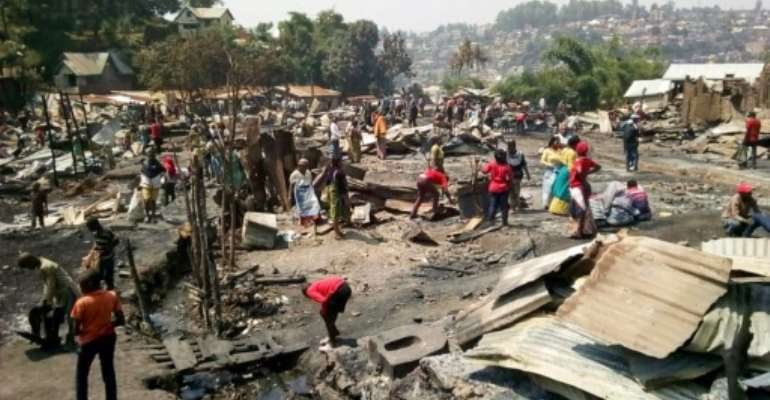 A massive fire sparked in a house where a woman fried donuts near cans of petrol, razed more than 150 homes in the eastern DR Congo, killing a seven-year-old girl.. By Ricky OMBENI (AFP)

A massive fire sparked in a house where a woman fried donuts near cans of petrol, has razed more than 150 homes in the eastern DR Congo, killing a seven-year-old girl, officials and residents said Monday.

The fire broke out Sunday evening in the city of Bukavu, where locals were celebrating the country's 4-0 African Cup of Nations victory over Zimbabwe.

"The fire started in a house where a woman was preparing donuts and where a fuel seller kept at least ten cans of petrol," civil protection official Aime Lubago told AFP.

Mayor Gerard Munyole of the Kadutu commune struck by the blaze said a child was killed, three people injured, and 150 homes burned down, leaving about 400 families roofless.

Another source said more than 200 homes were destroyed.

"We have nothing left. We spent the night under the stars, (me,) my six children and my wife," said 59-year-old victim Boaz Bahati.

A firetruck sent to the scene Sunday could not find its way through the tightly-packed maze of houses built in contravention of urban planning regulations, Lubago said.

Another fire razed dozens of houses in another Bukavu suburb last August.

Constructed on the flanks of hills overlooking Lake Kivu, the city -- a mix of shacks and villas -- is densely populated.