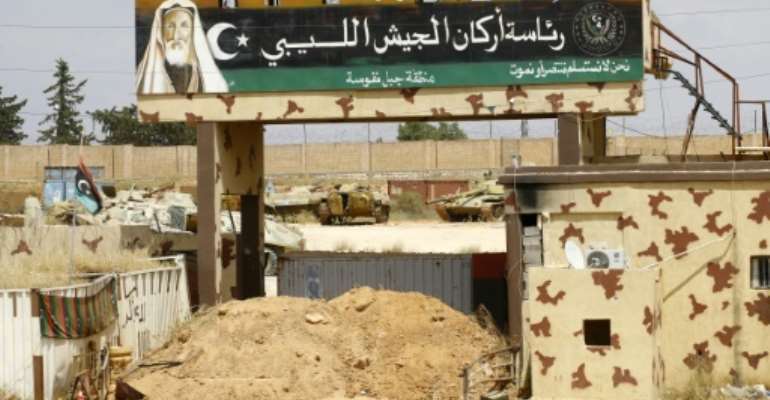 The strategic town of Gharyan, retaken on June 26 by forces loyal to Libya's internationally recognised government, served as a main supply base for strongman Khalifa Haftar in his offensive to take the capital Tripoli. By Mahmud TURKIA (AFP)

"The sailors are free. According to their wishes, they continue to work," said the official, speaking on condition of anonymity.

The ministry did not give details about when the six were first held.

Turkish President Recep Tayyip Erdogan last month confirmed that his country provides weapons to the Government of National Accord (GNA) under a "military cooperation agreement".

Haftar's forces, which hold much of eastern and southern Libya, launched an offensive in early April to seize the capital from the government.

On Sunday, his forces said they destroyed a Turkish Bayraktar drone in a strike on an airport in Tripoli.

Turkey's defence minister had earlier on Sunday warned Ankara would retaliate against any attacks.

Libya has been mired in chaos after multiple militias were locked in a power struggle following a NATO-backed uprising ended with dictator Moamer Kadhafi's death in 2011.

Turkey's interest in Libya relates to its Ottoman past as the country was part of the empire until 1912 when the north African country was conquered by Italy.

Libya has become a key battleground in a regional struggle between backers and opponents of Islamists including the Muslim Brotherhood, to which Erdogan's ruling party is affiliated. Haftar has the support of the United Arab Emirates and Egypt.