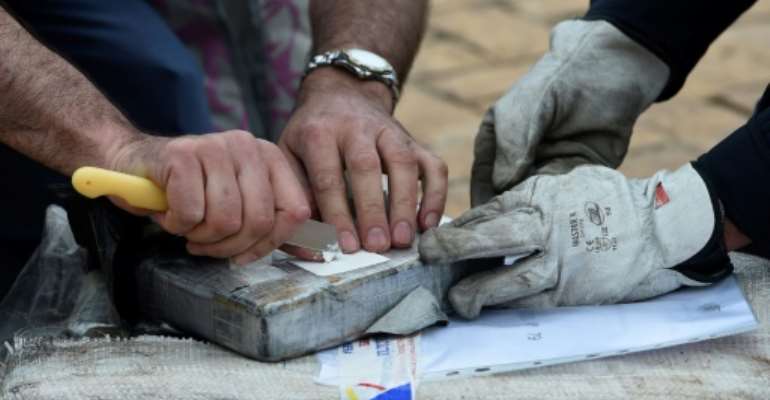 The white powder produced from coca leaves, mainly in Colombia, Bolivia and Peru, is increasingly transported by sea via the Caribbean, Maghreb and West Africa to destinations further afield.. By MIGUEL RIOPA (AFP/File)

Senegalese authorities have discovered more than a tonne of cocaine in the past week hidden in shipments of new cars from Brazil waiting to be offloaded in the port of Dakar, the customs service said Monday.

Officials found 798 kilogrammes (1,760 pounds) of the white powder in 15 new cars among a delivery of dozens over the weekend, the service said in a statement.

This came just days after another 238 kg was found in a separate car shipment -- also from Brazil, in the same port.

Investigations are continuing, said the customs service, without specifying the street value of the cocaine seized.

At least 15 Senegalese people have been arrested, according to local media.

Cocaine is regularly found at the port and international airport of Dakar -- one of West Africa's main transit points for passengers and merchandise.

The single biggest amount ever seized was 2.4 tonnes, in the coastal region of Mbour in July 2007. Suspected dealers from Colombia, Ecuador and Venezuela were arrested, tried, and convicted.

The white powder produced from coca leaves, mainly in Colombia, Bolivia and Peru, is increasingly being transported by sea via the Caribbean, Maghreb and West Africa to destinations further afield.

Global cocaine production reached a record high of nearly 2,000 tonnes in 2017, according to the UN Office on Drugs and Crime.

At the same time, seizures of cocaine rose to a record 1,275 tonnes.