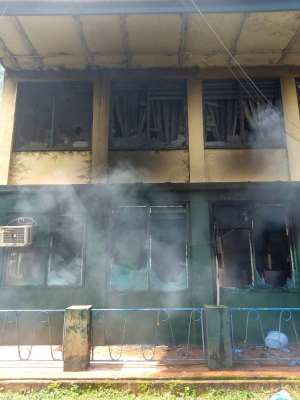 The Bosai Group, which happens to be the majority shareholders of the Ghana Bauxite Company (GBC) has made a passionate appeal to the ruling government to implement a long-term security solution that will prevent the Awaso Violence from occurring again in the future.

The Chinese Investors lamented that if these things are not checked Investor Confidence in Ghana will obviously go dead.

It would be recalled that a unionized group amongst the workers of the GBC's mine site in Awaso went on a rampage and ended up destroying properties of the Chinese owned Bosai Group after protesting for two days over what they described as poor working conditions.

Though prior to the incident, the company was in negotiation with the workers to address their concerns, they still went ahead to cause chaos.

More than six offices, including the Human Resource Department and adjoining offices, were burnt together with some loading trucks of the company.

Speaking on the issue in an interview with ModerGhana, Mr. William Liu Xin, who is the Vice General Manager of Bosai Group, called on the government to establish a mini security base at the mining site that will be manned by at least 10 security personnel to offer protection.

"These are some of the Security lapses scaring away Investors," Mr. Liu Xin remonstrated.

According to him, while they want the perpetrators of the violence to be brought to book, they strongly believe a permanent security presence at their operational site will help prevent the vandalism that occurred from being repeated in the future.

“We would like to urge the law enforcement department to order the violating suspects to be brought to book and to be brought to the law. We will also want to encourage government, if they can implement a long-term security solutions or if we can have some armed police or security force permanently at our operation site just to prevent this kind of event to occur again”, Mr. William Liu noted.

With the company having already submitted a proposal to government expressing their intention of establishing a Bauxite refinery here in Ghana, they insist an improved security will restore the tainted confidence following what has happened.

“When this action happened it actually affect our confidence of making investment. But as long as we are observing how the situation is going on, let's see if we can have it restored”, William Liu Xin added.

The Bauxite refinery company when established will boost the economy of Ghana and create over 1,000 employment to decrease the unemployment toll in the country.