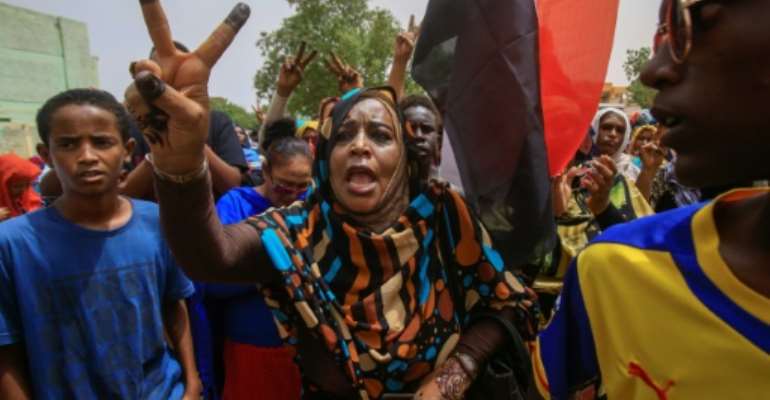 Sunday's protests were the first mass demonstrations in Sudan since a deadly crackdown against a protest sit-in on June 3, which left dozens dead. By ASHRAF SHAZLY (AFP)

"Just fall, just fall," Hadia chanted, her voice cutting through the din as a convoy of paramilitaries rolled past a mass of flag-waving protesters in downtown Khartoum.

She was one of tens of thousands who hit the streets Sunday in Sudan's capital and other cities, responding to calls by protest leaders to keep up their "revolution" and pressure the ruling generals to hand power to civilians.

Despite clouds of tear gas and a large deployment of the feared paramilitary Rapid Support Forces (RSF), cheering crowds thronged the avenues of the capital.

Wrapped in large Sudanese flags, protesters whistled, cheered and chanted the slogans of the uprising.

"Civilian! Civilian!" they shouted, accompanied by a pulsing cacophony of car horns.

"Free revolutionaries, we will finish the job!"

At times, the processions trailed through intersections where riot police and RSF troops were deployed, accompanied by pick-ups mounted with heavy machine guns.

"We want a civilian government... we want a safe country and prosperity," hollered Hadia Abdel Rahman, her one year-old daughter balanced on her hip.

'The country is suffering'

The protesters have been locked in a tense standoff with Sudan's ruling military council since the generals took power after ousting longtime leader Omar al-Bashir in April.

As the Islamic holy month of Ramadan drew to a close with the Eid al-Fitr festival in early June, armed men in military fatigues stormed a protest sit-in outside army headquarters in Khartoum.

There and in the crackdown that followed, they killed at least 128 people, according to doctors close to the protesters.

Sudanese protesters, seen here waving the country's former and current national flags, have been locked in a months-long standoff with military generals who have resisted calls to hand power to civilians. By ASHRAF SHAZLY (AFP)

The health ministry says 61 people were killed that day.

"We celebrated Eid with the sound of bullets and the blood of martyrs," said protester Hadia on Sunday.

"Our children are being killed in the streets," added the 29-year-old, who wore a colourfully patterned traditional veil.

Khaled Abdel Karim carried on his shoulders his four-year-old nephew, who was carrying a large Sudanese flag.

"The country has been suffering for 30 years... We are here to let the younger generations know" what happened, Abdel Karim said.

"We must anchor in them the love of the nation."

'The revolution will not die'

Marchers on Sunday also passed the homes of some people killed since protests broke in December after the government tripled the price of bread.

The mother of Mahjoub al-Taj and dozens of demonstrators stood in a small dusty courtyard named in honour of her son.

"We are all Mahjoub," they chanted in unison.

They paused only to quietly recite a short prayer in memory of the student, killed in December during clashes near his university.

Protests first broke out against Sudanese dictator Omar al-Bashir's three decade rule in December after the government tripled the price of bread. By - (AFP)

"You are all my children," said his mother, a Sudanese flag tied around her shoulders.

She shifted slowly between sobs and protest chants, tears running down her cheeks.

Nada Adel, a pink veil loosely framing her face and pierced nose, said the protests would continue until the generals handed over power.

"We're fed up with the military. For decades this country has been ruled by the military. It didn't work and it will not work," said the 28-year-old.