Will It Have To Take A Mass Revolt To Halt The Destruction Of The Atewa Forest Reserve? 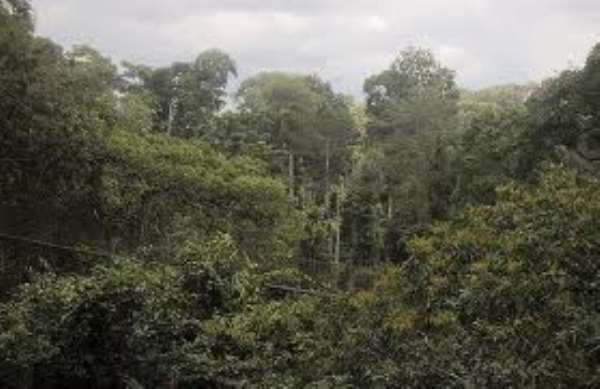 It was recently announced that China's Silk Road Fund, had acquired a 49 per cent stake in ACWA Power RenewCo, the Saudi-based utility company, ACWA Power's renewable energy subsidiary. How very interesting. Clearly, we are going to have to speak plainly, about the egregious-idiocy that borowing U.S.$2 billion from SinoHydro in exchange for allowing the destruction of the Atewa Forest Reserve in order to mine its bauxite deposits, to pay for that sodden loan, represents.

The question is: When they were giving away the vital-for-the-welfare-of-present-and-future-generations, Atewa Forest Reserve, to SinoHydro, to mine its relatively poor-quality bauxite, for U.S.$2 billion, why did it not occur to the geniuses amongst those who now govern our homeland Ghana that instead of that abomination they had contracted for, they could instead offer stakes in our debt-laden-but-potentially-profitable energy sector companies, such as: the Volta River Authority (VRA); the Bui Power Authority (BPA); Gridco; the Tema Oil Refinery (TOR); to SinoHydro for U.S.$4 billion? Haaba.

There is no question that if the well-intentioned and nature-loving President Akufo-Addo, does not pull back from this terrible idea, future generations will curse him roundly for allowing the destruction of a very important rainforest, which took millions of years to evolve to what it is today. Is the president not aware that as a National Park, the Atewa Forest Reserve could be the pillar for a new green economy for Akyem Abuakwa - that will earn Ghana billions of dollars from community-based ecotourism, and create jobs galore and wealth that remains in Ghana?

The question is: Why is President Akufo-Addo, who is co-chair (together with Norway's premier Erna Solberg), of the UN Secretary General's Advocacy Group overseeing the implementation of the UN SDGs, allowing his government to destroy what is a designated Globally Significant Biodiversity Area (GSBA), containing many rare species of flora and fauna found nowhere else in the world? Befuddling.

As someone who supports him 100 percent (but loathes the political party he leads), I find it beyond belief that President Akufo-Addo, of all people, has been convinced to allow the destruction of a unique upland evergreen rainforest, which is also a key ecosystem services provider that serves as watershed for three major river systems - the Birim; the Ayensu; and the Densu - on which most of those living in the southern half of urban Ghana, depend on for their treated drinking water supplies. Amazing.

Every right-thinking Ghanaian, who has foresight and cares about the well-being of our nation, as well as the welfare of its citizenry (and is an independent-minded thinker), must fight to help stop this monstrosity from going ahead - even at this eleventh hour moment. Vice-President Mahammudu Bawumia and Senior Minister Hon. Yaw Osafo Marfo must be condemned in no uncertain terms, for this unprecedented act of environmental irresponsibility, dressed up as innovative thinking.

Shame on them for a singular act of barbarity against Mother Nature that will ruin the quality of life for tens of millions amongst present and future generations of our people, as sure as day follows night. Sodden philistines. Haaba. The question we must all ponder over is: Will it have to take a mass revolt to halt this idiocy, as some committed environmental activists apparently suggest, according to bush-telegraph sources? Hmmmm, Oman Ghana - eyeasem o: asem kesie ebeba debi ankasa!

Akufo-Addo commences process to remove Anin-Yeboah over $5m ...
34 minutes ago