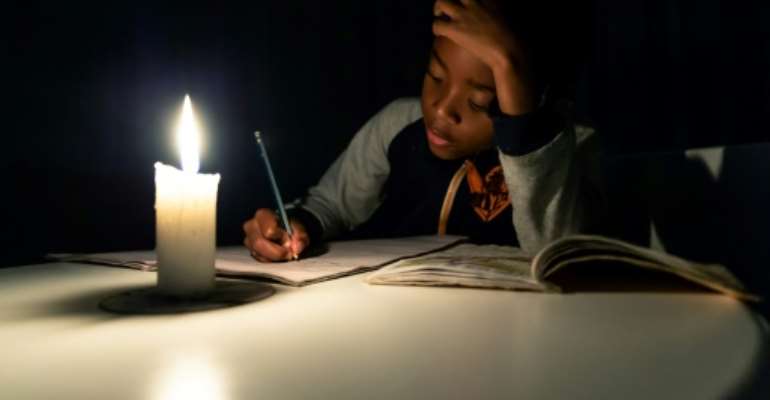 The next time there's electricity will be past his bedtime. By Jekesai NJIKIZANA (AFP)

Zimbabwe's worsening electricity shortages mean power is often only available for a few hours in the middle of the night -- forcing furniture maker Richard Benhura to start work at 11:00 pm.

It is just one aspect of the country's dire economic difficulties as official inflation nears 100 percent and supplies of daily essentials such as bread and petrol regularly run short.

"If you want to work, you have to be here overnight and start when the electricity comes on until it goes off around 4:00 am," Benhura, 32, told AFP as he made some wooden backrests for chairs.

At the open-air Glen View furniture market in Harare, Benhura welds steel frames for chairs and grinds off rough edges in the darkness, and then returns to do his manual woodwork in the daylight.

Zimbabwe -- where the economy has recently lurched into a fresh crisis -- introduced rotational power cuts of up to 19 hours a day earlier this year, forcing many to do their ironing or cooking in the dead of night.

For Egenia Chiwashira, a resident of the poor Harare suburb of Mbare, the outages are a grim burden.

The mother of three in her 40s says she can barely afford to feed her family, let alone pay for a generator.

'We are in darkness'

"To cook porridge for my children needs electricity, also for me to prepare myself something to eat," Chiwashira said, while stoking a fire she had made outside her house to prepare supper.

"We are always in darkness. It's not easy. Life in the city is tough without electricity. You have to buy firewood unlike in rural areas where you can fetch it in forests.

"I can't afford to buy both wood and candles, so my children cannot do their schoolwork in the evening."

Zimbabwe last month introduced rolling electricity power cuts known as "load-shedding" due to low water levels at the Kariba hydro-power station, as well as the country's crumbling power infrastructure and lack of funds to pay for energy imports.

"Last week we had no electricity on Friday, Saturday and Sunday," Chiwashira said. "We only got supplies back on Monday afternoon."

Energy minister Fortune Chasi has pledged the outages would be reduced, and urged consumers to pay their bills to enable ZESA to buy more power from neighbouring countries.

"We will be turning the corner pretty soon," Chasi told a post-Cabinet briefing this week, adding that ZESA had just paid a $20-million debt to neighbouring South Africa.

One of few to see an improvement in business is Simba Vuremu, a stationery shop owner who has added solar lighting units to his stock.

"They are selling and selling fast," he said.

After Robert Mugabe was ousted from power in 2017, many Zimbabweans hoped that their country's long economic deline would be reversed under his successor President Emmerson Mnangagwa.

But the economy has declined further, with shop prices rocketing at the fastest rate since hyperinflation wiped out savings and pensions ten years ago.

This week, Zimbabwe in theory ended the use of US dollars and other foreign currencies that have been the official legal tender since the Zimbabwe dollar was rendered worthless in 2009.

For Caution Kasisi, 45, another furniture-maker in Glen View, the power cuts have only added to his worries.

"We have a small petrol-powered generator which cannot run for a long time," he said.

"The price of food and other things like school fees are going up and we are not getting much money because we can't deliver our goods. We have got a problem."