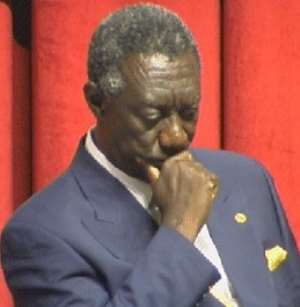 429 companies gone bankrupt .....Too many hurdles for businesses Ever since President John Agyekum Kufuor assumed office in 2001, he has traveled extensively, about 156 times around the world. Indeed, arguably, he could be described as Ghana's number-one tourist of the century. President Kufuor's explanation for such trips is simple: To woo foreign investors into the country. But while the President gallops over the seas across nations in search for investors to his 'Golden age of business' Ghana, many companies back home are folding up. Yet despite his efforts, the investors are not coming; unemployment is still rife and he is complaining that the economy is not growing fast enough.

Available statistics at the National Labour Department, (NLD) indicate that from year 2000 to date, a total of 429 companies have filed to be declared redundant.

Their reasons? That the cost of production is too high, they are suffering from low levels of productivity and non-availability of capital.

A source at NLD attributes the situation to the trade liberalization policy being implemented by Ghana. “People come in with goods from anywhere and only pay little tax on them. As a result, they are able to sell cheaply and people patronize them despite their quality.

“Local producers cannot sell theirs cheaply because of high production cost. These companies are therefore left with no other choice but to reduce their labour force or close down.”

But aside the over liberalized trade regime, which has seen Ghanaian business leave the market, Mr. Cletus kosiba, Acting Executive Director of the Association of Ghana Industries (AGI) notes that “Ghanaian businesses are also chocking under heavy administrative procedures in addition to poor and high cost of utility services such as water and electricity.”

Inefficiencies in the utilities sector are often posted to the business sector (and families as well), resulting in increased cost of production, which reduces the competitiveness of an already disadvantaged sector.

Registering business ventures in Ghana too means going through numerous licensing and registration procedures with huge costs and time. The frustration of the business community on the negative impacts of the presence of burdensome administrative and registration controls was recently reechoed by the German Ambassador, Mr. Peter Linder who complained about the high cost of registering businesses in Ghana during the launch of the Ghanaian-German Business Association (GGEA) guide titled, “Doing Business with Ghana.

It takes not less than 16 steps and 127 days to complete licensing and permit requirements of existing business in Ghana. Completing a business registration process comes at a cost of about 1,549.7% of the nation's per capita income according to a World Bank survey, titled “Doing Business in 2006.”

Corruption, inflexible labour laws, government's arbitrariness, archaic legislative and legal system hostile to private investment and adversarial attitude of the public sector towards the private sector are some of the constraints the private sector is grappling with. Land disputes, insecurity and litigation are also entrenched.

The financial sector has also not been business friendly. Long-term credit is hard to obtain; interest rates are still very high despite, the Bank of Ghana reducing the prime rate from as high as 18.5% early this year to 15.5% as well as reducing banks' secondary reserve requirements from 35% to 15% and despite falling inflation.

With these constraints to investment and the growth of local industries it seems the golden age of business has still a long way to come.

So, President Kufour may continue singing his 'Golden age for business,' 'Private sector being the engine of growth,' 'Ghana, a golden experience,' slogans, if these complaints of the business community are not resolved, the companies would continue to fold up and may be, the NLD would be receiving more redundancy applications this year.

Should that trend continue, the goal of Ghana attaining a middle-income status by either 2010 or 2015 would be significantly missed.

Under the labour Act, applicants are required to apply to declare redundancy four months prior to the contemplated exercise.

The source explained that upon receipt of such application, labour inspectors are sent out to investigate whether the exercise is a genuine one. “They go to the field to ascertain if the applicants are facing real crisis or it is just a case of victimization. In essence, the department has to be convinced.”

Packages for such redundancy exercises are often in accordance to the Collective Bargaining Agreement existing binding unions and employers. There have been several cases of retrenchment of workers in the last few years, particularly in textile sector.

This has led to an increase in underpayment of workers, engaging workers on casual bases and contract work particularly in the textile industries. Others have totally shut down.