Sudan general warns against vandalism ahead of mass protest 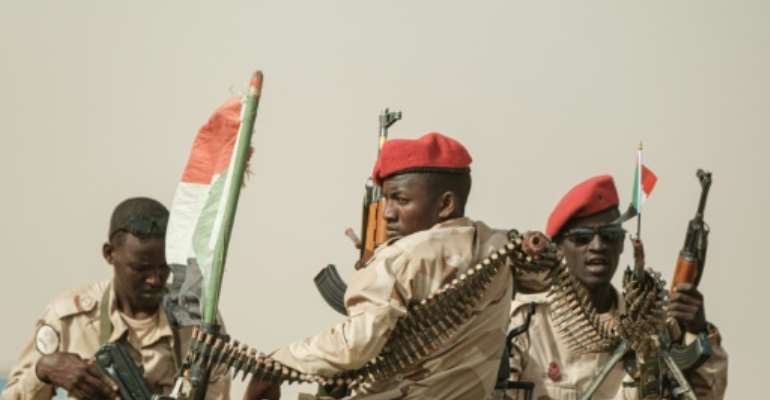 Sudan's Rapid Support Forces paramilitaries have been patrolling the streets since a deadly June 3 crackdown on protests. By Yasuyoshi CHIBA (AFP/File)

A top Sudanese general Saturday warned he will not tolerate any vandalism at a planned mass protest, but insisted the ruling generals would hand power to a civilian administration.

General Mohamed Hamdan Dagalo's warning came as the country's umbrella protest movement called for a "million-man" march in Khartoum on Sunday against the generals who have seized power since ousting longtime ruler Omar al-Bashir on April 11.

"There are vandals, there are people who have an agenda, a hidden agenda, we don't want problems," Dagalo, the deputy chief of the ruling military council, told a rally in comments broadcast by state television and apparently directed at organisers of the protest.

Dagalo commands the feared paramilitary Rapid Support Forces, which have been heavily deployed in Khartoum since a deadly crackdown on a protest camp on June 3 left dozens dead and hundreds wounded.

Dagalo, widely known by his nickname Himeidti, justified the heavy presence of security forces in the capital.

"The military forces who are deployed in Khartoum are there for the security of the people, not to disturb them," he said.

Sunday's mass rally will be the first attempt to mobilise protesters after the June 3 crackdown on the protest camp outside the military headquarters in Khartoum.

The violent dispersal of the sit-in came after talks between the generals and protest leaders collapsed over who should lead a new governing body - a civilian or soldier.

The generals have resisted to transfer power to a civilian administration as demanded by protesters, rights groups and Western nations.

Ethiopia and the African Union have mediated between the two sides and proposed the creation of a 15-member civilian-majority body to govern the country during a three-year transition period.

The generals said Friday the proposal could be a base to resume talks with protesters, although they expressed "some observations", a spokesman said.

About 130 people have been killed since the June 3 crackdown, according to doctors close to the protest movement.

On Saturday, Dagalo insisted the generals had no intention of holding on to power.

"The military council is just a guarantor," he said.

"We are saying we want a civilian government, a government of competences, of independents. This is not political talk...This is true."

We'll not accept the 4% salary increment — Coalition agains...
43 minutes ago