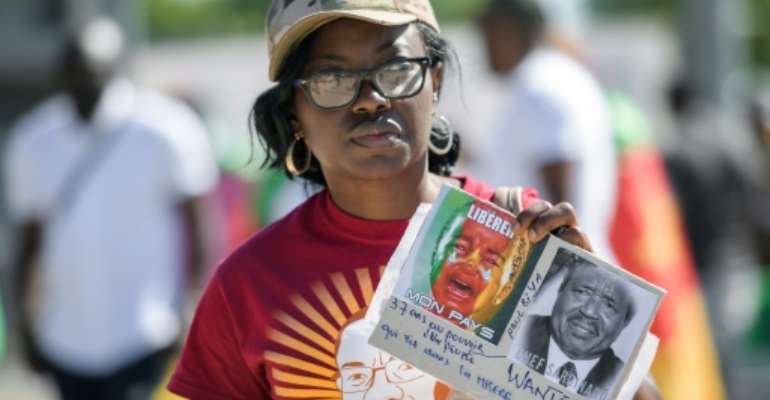 Protesters in Geneva have not been granted permission to approach the five-star hotel where Cameroon's president is staying. By FABRICE COFFRINI (AFP)

Large numbers of police, many in riot gear, were posted outside a luxury Geneva hotel Saturday where Cameroon's president is staying, as protestors against his leadership began gathering nearby.

Cameroon's 86-year-old president, Paul Biya, who has ruled the country since 1982, "has run his dictatorship for nearly half a century," said rally co-organiser Robert Wanto, a Cameroonian national who has lived in exile for three decades.

"We are here to demand that Cameroon be allowed to enter the modern democratic era," he told AFP, standing on a square in front of the United Nations European headquarters, where a large demonstration is scheduled to kick off Saturday afternoon.

Several hours before the rally's start, around 30 protestors draped in Cameroonian flags were already busy setting up a stage and hanging banners with graphic pictures of dead bodies apparently mangled by torture, with the message: "The people say no to Paul Biya".

Geneva police told AFP they were expecting a "large" demonstration, and said they had been authorised to use to square in front of the UN.

They have not been granted permission to march the some 500 metres (yards) to the five-star Intercontinental Hotel, where Biya is believed to have been staying since Sunday.

But Wanto told AFP that the demonstrators had given Biya an "ultimatum" to leave and that if he remained at the hotel when the protest began, "we will march there".

He pointed out that Biya had made it a habit to stay at the pricy Intercontinental during long visits to Switzerland, where he reportedly comes for medical treatment.

"He thinks it is ok to come here and spend billions of our money when our country is economically sick," Wanto said.

Early Saturday, dozens of suit-clad men believed to be part of the president's security detail stood around the hotel.

Several police vans were also parked outside the hotel and groups of officers had been stationed at regular intervals between the tall glass building and the UN square.

Over the past week, there have already been several scuffles with small numbers of demonstrators in front of the hotel and even inside the lobby.

An attack on a Swiss journalist covering the events by men believed to be Biya's security staff even sparked a diplomatic incident, prompting the Swiss government to summon Cameroon's ambassador in Bern on Thursday.

"The dictator must be senile to want to transport the violence he unleashes on his country on a daily basis to the soil of a democratic country," Wanto said.

Cameroon, a former French colony, has faced a succession of crises and is currently wracked by a deadly conflict between separatists and government forces in its English-speaking west.