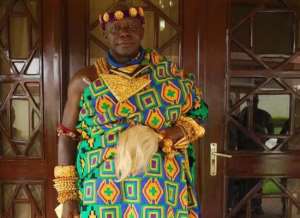 Until recently only a few persons took note of the subtle clean-up of the chieftaincy institution in Asanteman.

In the past fortnight or so some chiefs have lost access to the stools they have occupied for twenty years or so and for good reason.

They have defied the directives of the King of the Asante Kingdom and undertaken actions unilaterally.

The Asantehene, Otumfuo Osei Tutu II, is one monarch whose obsession with maintaining the sanctity of the cultural heritage of his ancestors and of Ghana is not in doubt. Therefore, his efforts in weeding out bad nuts who have found themselves occupying stools under him are commendable.

Chieftaincy is today associated with money where there is land to be sold sometimes under dubious circumstances. There have, therefore, been many instances of litigation occasioned by breaches and therefore requiring somebody with superior authority cracking the traditional whip which is what the King is rightly doing.

The litigation over land in the urban parts of the country especially Accra and Kumasi are enormous and time-consuming. While some of these cases are within the powers of such important overlords like the Asante King, some of his subjects for reasons best known to them have defied his orders not to turn to the courts in such matters. Having committed the unthinkable in defying the orders of the King, they deserve the consequences of their disobedience.

The double transaction over land by some minor chiefs has left behind sour taste in the palates of many victims in the urban areas as noted in a preceding paragraph.

As representatives of our cultural heritage chiefs must not only uphold the values and mores of their people, they must also represent models for their subjects to emulate.

However, when they fall short of the standards expected of them as those who have lost access to stools they occupied courtesy of the orders of the Otumfuo, the King deserves commendation.

His action is a housecleaning exercise which must be a continuous process to ensure the purity of what the ancestors of the Kingdom bequeathed to their descendants.

The important role of the chieftaincy institution can only be maintained when such housecleaning exercises are undertaken.

We have heard about chiefs showing apprehension over the King's ongoing action. They should not be scared if they have not done anything untoward such as breaching the standards of discipline and the directives of the King.

We recommend the King's module for adoption by other superior traditional leaders in other parts of the country.

The nation's capital which unfortunately is no showpiece of cultural discipline needs such action. In the absence of such an overlord authority as it obtains in Accra the unwholesome scenarios of two or even three claimants to one stool will prevail.