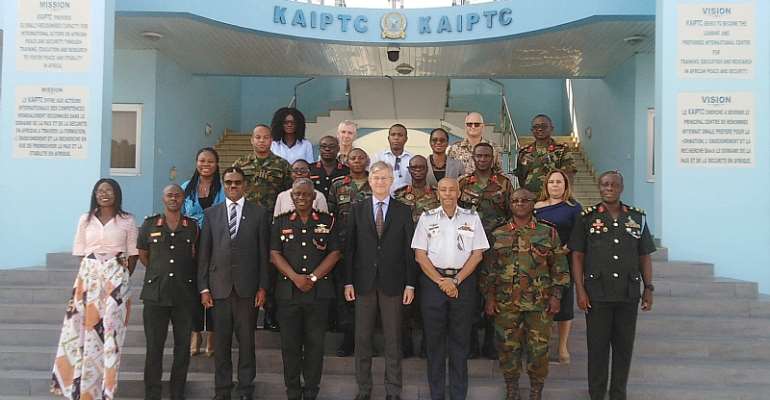 The Under-Secretary-General for Peace Operations (USG-PO), His Excellency Jean-Pierre Lacroix is calling for the implementation of more women in peacekeeping and security operations adding that their involvement will create a more comfortable relationship between soldiers and civilians in war zone areas.

According to him, although this proceedure has two but different related dimensions, increasing the number of women in peacekeeping operation will help build trust, deal with operational setting and deal with women and children traumatized from attacks by armed groups.

Speaking on a vist to the Kofi Annan International Peacekeeping Training Centre (KAIPTC) which forms part of efforts to deepen ties and explore possible areas of collaboration with the Centre, His Excellency Mr Jean-Pierre Lacroix said "To increase the number of women peacekeeping operation, I agree with the Chief of Defense Staff on the involvement of more women in every area of peacekeeping. It is significant that when it comes to engaging or creating trust, dealing with operational setting as well as women and children traumatized from attacks by armed groups, women in uniforms have a way of calming situations and that is important."

He added that the involvement of women helps in achieving local conflict settlements which are often very important in creating an environment of peace and stability.

The Under-Secretary-General for Peace Operations (USG-PO) disclosed that Ghana is synonymous to peacekeeping adding that the country has not withdrawn its services ever since the inception of the peace mission emphasising that the soldiers have shown enough activeness and effectiveness in the line of duty.

"This centre is a well known Institution and I am glad to be here. I congratulate your soldiers for the rich and vibrant activities being carried out and I believe that it is important the United Nations supports the peace department to be very strongly connected to the KAIPTC." he emphasised.

His Excellency Mr Jean-Pierre Lacroix highlighted the need for soldiers to be very focused on improving impacts and effectiveness to training as well as taking a broader look at the key challenges on how peacekeeping operations can solve security in Africa.

He said "I want to highlight a few issues that were mentioned. I want to put them at the backdrop of the initiative that the Secretary General of the United Nations has undertaken to show on peace keeping which is called Action for peace keeping and I will start by saying that Ghana has been supportive in this inintiative from the onset which was useful to us and we will continue to rely on your support to carry out different activities under this initiative."

The Under-Secretary-General for Peace Operations (USG-PO) stated that the action for peacekeeping initiative is aimed at recognising the achievements of mission which are quiet significant and the need to be highlighted in terms of bringing back stability to a number of countries in terms of protection of civilians and free movements.

"I think it is worth explaining the challenges soldiers at peace keeping missions are facing today and emphasize that these challenges will be addressed effectively only through a very intense co-operative efforts via member states together with the secretariate." he mentioned.

His Excellency Mr Jean-Pierre Lacroix highlighted that the political solutions used in supporting peacekeeping are very slow to materialise adding that this leaves the UN without clear prospects for exit in most of the areas where peace keepers are deployed.

"The fact that today's peacekeeping environment is becoming much more dangerous and challenging, we have been having many fatalities in such area because the 'blue helmet' is not protecting our peacekeepers but rather it has become a target. This new challenge will be addressed." he lamented.

She added that the centre will ensure that much focus will on women in peacekeeping and security since KAIPTC is aimed at building the African capacity to fully implement the African Union (AU) protocol to the African charter on the right of women in Africa.

She said "The UN resolution 1325 and its follow up resolutions on women peace and security are within the context of Africa."

Althought the United Nations are operating in most places that peacekeepers are being deployed, His Excellency Mr Jean-Pierre Lacroix believes, it is mandatory, the ordinary civilian is protected at all cost.

"There is the need for collective increasing efforts at bringing about durable political solutions because it has to be clear that peacekeeping is a tool that can help create conditions for durale political solutions to be achieved since it can't do that by itself. It needs a very strong partnership with the member state sub-regional organisation, we need much support from thesecurity council but unfortunately it is divided and we want to place strong emphasise on political dimension.

The Under-Secretary-General for Peace Operations (USG-PO), His Excellency Mr Jean-Pierre Lacroix says training will continue to be an important part of the United Nation's efforts and believes that the introduction of mobile-training will add alot in peace keeping missions as well as trainings.

Akufo-Addo commences process to remove Anin-Yeboah over $5m ...
45 minutes ago