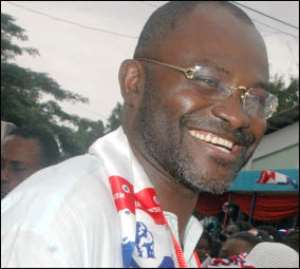 Ghana's parliament on Friday June 28, adopted a motion for the House to make some changes on its select committees members.

The changes was as a result of committee chairpersons been appointed Ministers if states among of others.

Hon Stevens Siaka, Member of Parliament (MP ) for Jaman North who was chairman of the Education Committee has been reduced to a members.

Mr Siaka the current Chairman for Education Committee is the Deputy Minister for the Bono Region.

He has been replaced by William Quaittoo MP for Birim Central, who had resigned sometime in 2017 as Deputy Minister following his ethnocentric comment against people of Northern Ghana.

Other Chairman persons who have been reshuffled includes Kennedy Ohene Agyepong, current Chairman of Communication Committee has been moved to Local Government Committee as Chairman.

He has been replaced by Frederick Opare Ansah, who was a member of the Communication has been elevated.

On the Minority side, member of Parliament for Juaboso, Kwabena Mintah Akandoh takes over from Joseph Yiele-Chiere, MP Wa West as Ranking Member on Health Committee.

Meanwhile First Deputy Speaker and Chairman of Appointments Committee, Joseph OSEI Owusu has expressed concerns of challenges facing his committee, citing lack of quorum whenever the have meetings.

He said, out of 26 members on Appointments Committee, made up of MPs from both sides of the House, only 9 aren't ministers or deputies.

The composition, he said do not only a challenge to the Appointment Committee but also the smooth and proper scrutiny of appointees who appears before them for vetting.

The Motion for the House to adopt the report of the Committee on Selection on the re-composition of Committee of the House was accordingly adopted by consensus.

We've Not Backtracked; We Still Opposes Intransigent, Headst...
36 minutes ago