Who is saying what at US-Taliban talks in Qatar? 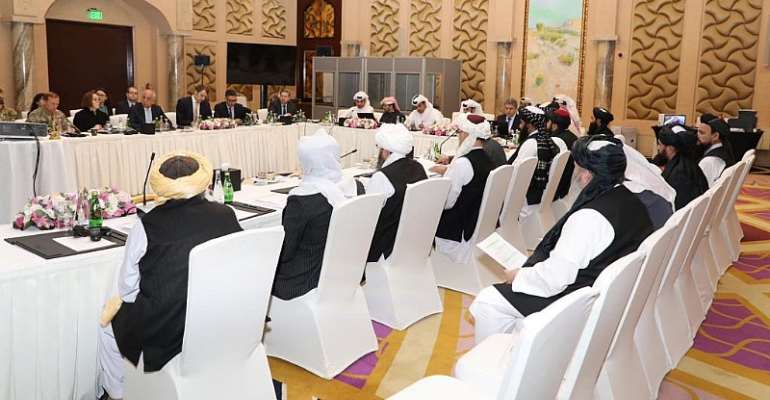 On 29 June, Qatar will host the seventh round of direct talks between the Taliban and the United States. The US side will be represented by Zalmay Khalilzad, an Afghan-born US Special envoy. Afghans hope the process will result in a long wished-for peace, but many obstacles remain.

In May, US and Taliban negotiators ended a sixth round of peace talks in Qatar with "some progress" made on a draft agreement that included the withdrawal of US forces from Afghanistan, a nationwide ceasefire and intra-Afghan talks.

The talks go “slowly and gradually things are moving into the right directions,” says Abdullah Kahn, Managing Director of the Pakistan Institute for Conflict and Security Studies in Islamabad. And for the time being there are no direct talks between the Taliban and the government in Kabul.

“The Taliban has made it clear on many occasions that they do not consider the Kabul government as a legitimate government.

“They wanted to have direct talks with America. Their condition is met now, and I think it will happen very soon that they will talk to the Afghan government as well. Because they cannot write off the Kabul government."

People in Afghanistan are following the developments anxiously.

“People in Kabul and other cities see it positively. They are fed up with the fighting that's been going on for a decade. They want peace in Afghanistan.

Serious discussion
But he points at the “complex” situation in the country with many regional militant groups, such as the Islamic Movement of Uzbekistan which was formed in 1998 by Islamic ideologue Tahir Yuldashev and former Soviet paratrooper Juma Namangami, and affiliated with Al Qaeda and the Turkestan Islamic Party, an Uyghur group that has its headquarters in North Waziristan, but which operates in Afghanistan as well, which destabilises the region.

“The problem is: will the Taliban be able to control these groups? This will be a big challenge to them,” a topic that will constitute a “serious discussion” in the upcoming dialogue between the US and the Taliban in Doha.

There will be anarchy
Al Qaeda “has pledged allegiance” to the Taliban, so technically they “are associated”. Kahn estimates this will constitute the litmus test for “the willingness” of the Taliban to reach an accord with Washington.

Regardless of the outcome of Saturday's talks, the Trump-led US administration shows signs of fatigue with the Afghanistan war that has dragged on since 2001. How big is the risk that other powers might intervene in the case of a US withdrawal?

“If the US leaves, Afghanistan will fall into chaos. There will be anarchy and there will be civil war. The current situation is not encouraging, but such a future seems even bleaker.”

Regional powers India and China may be tempted to step in, but this won't be a solution, says Kahn.

Regional force
“Pakistan won't be ready to let India take a foothold in Afghanistan,” he says. Such an effort would only “escalate the tensions between Pakistan and India.” China “is concerned,” but not enough to employ a massive troop presence in Afghanistan.

The solution? “If the US wants to pull out, they should talk to the countries in the region. There should be a regional force comprised of Muslim countries in Afghanistan, including Turkey, Pakistan and maybe Iran. A peace force of neighboring countries that can fill the gap, and then the Americans can leave,” he says.