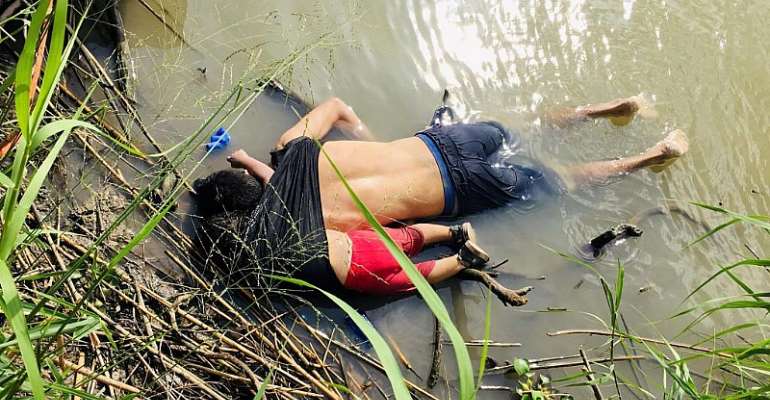 A harrowing photo of a migrant father from Salvador and his nearly two-year-old daughter who drowned as they attempted to cross the Rio Grande river into Texas has shocked public opinion and renewed the debate on immigration.

Like many of the 200 undocumented migrants who leave El Salvador everyday, Oscar Alberto Martinez Ramirez wanted a better life for himself and his family.

He and his wife Tania Avalos left the San Salvador capital on 3 April with their daughter Valeria, hoping to reach Brownsville in Texas, where Martinez's older brother, Carlos Alberto, lives.

Following the same route as a swelling exodus of migrants fleeing violence and poverty, they made the dangerous crossing from Guatemala across the 2,000 mile Mexican border to the city of Tapachula.

This influx of Central American migrants has overwhelmed the US immigration system, with President Donald Trump repeatedly using the term "invasion" on the southern border.

Mexican authorities reckon 150,000 migrants, mostly Central Americans, cross the border per year, but civil society organizations suggest that the true number is closer to 400,000 every year.

No visas
In Tapachula, Martinez and his family began their immigration paperwork.

Before, Mexican authorities would issue migrants swift visas, but under pressure from the Trump administration, President Andres Manuel Lopez Obrador now gives just travel permits, and border patrols have been stepped up.

Their plan was to join the roughly 200 people a day who put their names on the waiting lists to request asylum in the United States. But the office was closed.

Not keen to stay in Tamaulipas, a notoriously violent state where 72 migrants were murdered in 2010 by a drug cartel, they decided to cross the river.

On the surface, the Rio Grande looks placid, but strong currents run underneath.

The Salvadorans set off in pairs. Martinez swam with Valeria on his back, tucked under his shirt. His wife Avalos followed behind, on the back of Paredes.

Avalos told investigators the pair had nearly reached the other side when the river dragged them in and sucked them under.

Ghost of Aylan
The swollen bodies of Martinez and Valeria were found on Monday morning, face down in the water, Valeria's arm draped around Martinez's neck.

The photo, similar to that of Aylan Kurdi, the three-year-old Syrian child whose image – tiny, lifeless, lying face down in the surf in Greece – unleashed an outpouring of emotion.

On CNN, presenter Don Lemon said in a choked voice "that is what the immigration crisis looks like."

US Democrats, vying for a shot to take on Trump in 2020, quickly seized on the photo to blast the president's immigration policies, with Former Vice President Joe Biden, calling the image "gut-wrenching."

In February, Trump declared a "national emergency" in order to force through funding for his planned border wall with Mexico.

Nevertheless, the shocking photo of Martinez and his daughter, coupled with reports of "severely neglected" children at a Texan border patrol station have moved Americans to re-examine their policies toward migrants.

The top US border official John Sanders said he would resign on 5 July, and asylum officers have said Trump's policy of forcing migrants to remain in Mexico is “fundamentally contrary to the moral fabric of our Nation.”

End of American Dream?
It is a nation that was built on the American Dream, a dream of a land in which life should be better and richer and fuller for every man.

That was Martinez's dream. It ended in nightmare.
"I don't think the American Dream is out of reach," says Gloria J. Browne-Marshall, a playwright and professor of constitutional law.

"I think the American Dream has to be understood as an opportunity. And those opportunities become more difficult once people start putting up artificial barriers to maintain their own superior stance," she told RFI.

For Browne-Marshall, who has campaigned extensively against racial injustice, empathy is not enough.

"We can't let father and daughter drown and not see anything but an awful image in a newspaper. It has to be a trigger to act," she said.

Gov't sets up committee to ensure vaccine development in Gha...
10 minutes ago