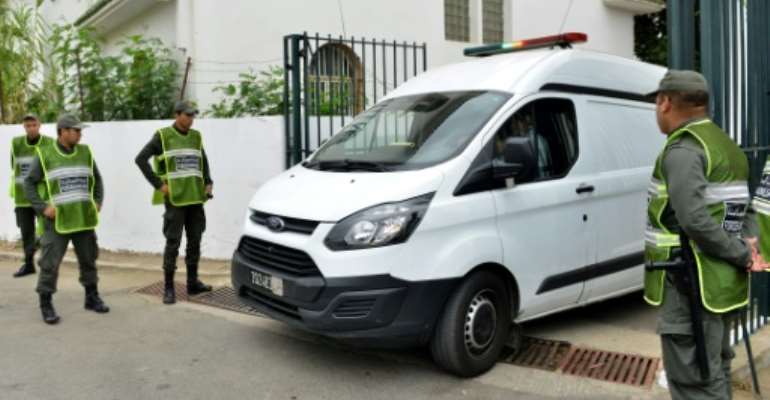 A van carrying suspects in the murder of two Scandinavian hikers enters the court house in Sale, Morocco on June 27, 2019. By - (AFP)

Lawyers for the family of a Danish hiker murdered last year in Morocco said on Thursday that authorities had failed to monitor the activities of some suspects before the killing.

Danish student Louisa Vesterager Jespersen, 24, and 28-year-old Norwegian Maren Ueland had their throats slit while camping in an isolated area of the High Atlas mountains in December.

Twenty-four defendants on trial in Sale, near the capital Rabat, are facing charges including promoting terrorism, forming a terrorist cell and premeditated murder.

The three main suspects, members of a jihadist cell accused of killing the women, admitted to the murders during a hearing in May, saying they were carried out in the name of the Islamic State (IS) group.

At Thursday's hearing, lawyers acting for Louisa's family said the brutal killings could have been spared had authorities heeded information concerning the behaviour of ringleader, street vendor Abdessamad Ejjoud.

The suspect who had been convicted for trying to join IS in Syria was released early from prison in 2015 and went on to meet former prison mates and other individuals without any checks from authorities, attorney Khaled El Fataoui said.

He alleged police had been informed of their activities but failed to act.

The lawyers demanded that Maghraoui and the then justice minister Mustapha Ramid be summoned for questioning, a request rejected by the court.

Ejjoud confessed at a previous heading to beheading one of the women, while co-defendant Younes Ouaziyad said he killed the other and a third man on trial, Rachid Afatti, said he videotaped the killings.

In theory, the killers could face the death penalty, but Morocco has had a de facto freeze on executions since 1993.

Investigators said the "cell" was inspired by IS ideology, but Morocco's anti-terror chief insisted the accused had no contact with the jihadist group in conflict zones.

IS has never claimed responsibility for the murders.