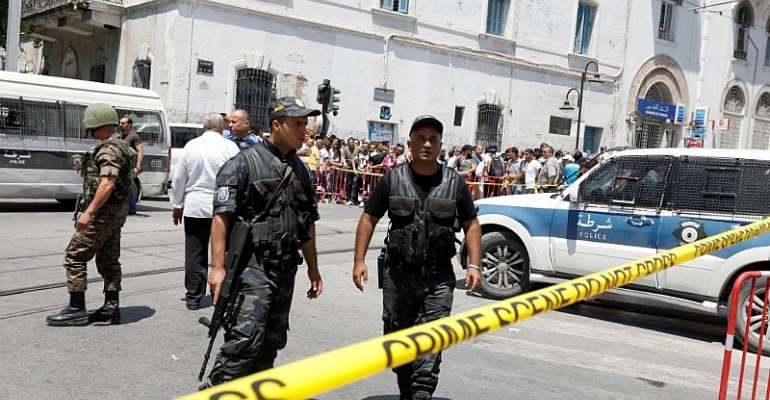 A suicide bomb attack targeted police and the National Guard in the Tunisian capital on Thursday, killing one and wounding at least nine people, including several civilians.

Body parts were found on the road around a police car on Habib Bourguiba Avenue near the old city, according to an AFP correspondent.

The suicide bomber did not kill anyone else "but five are wounded -- three civilians and two police officers," Zaag added.

The second attack targeted a base of the National Guard in the capital and wounded four security personnel, the ministry said.

"At 11:00 am an individual blew himself up outside the back door," of the base, wounding four security personnel, Zaag said.

People initially fled in panic, before some crowded around the scene of the attack, expressing anger against the authorities. Shops and offices were closed by police.

Tunisia has been fighting militant groups which are active in remote areas near the border with Algeria since an uprising forced President Zine al-Abidine Ben Ali out of office in 2011.

Last October, a woman blew herself up in the center of Tunis, injuring 15 people including 10 police officers. That explosion marked the end of a period of relative calm after dozens died when militants targeted a museum in Tunis and a beach resort in Sousse, also killing dozens.

Since then, security has been strengthened with authorities imposing a state of emergency. A third attack targeted presidential guards in the capital and killed 12. The Islamic State armed group claimed responsibility.

As a result, tourists stayed away from Tunisia, worsening the country's already weak economy.