A-G Refuses To Hire His Son 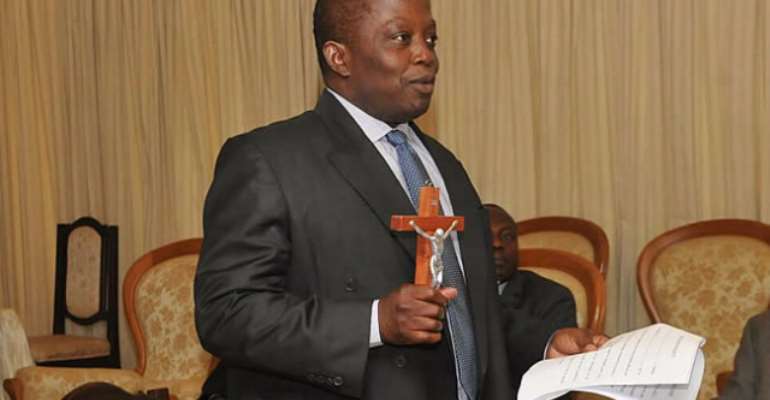 Are you a product of nepotism?
Who hired you and why were you hired?
Avoiding conflict of interest is something many CEO's and public office holders struggle to overcome. We see it happening all around us and we hear about it everyday. Needless to say, the practice of hiring relatives undermines public confidence and has the potential to create conflict with regard to loyalty or interest.

Daniel Yaw Domelevo, Auditor-General (A-G), avoided such pitfall early this year when his son wanted to apply for a job at the A-G's department.

"I said to who! You want to apply to me?"
Wow!, you exclaimed.
Unheard of, right?
The saints are not gone yet.
They aren't extinct. Did you think our world is fully-packed with monsters? It still has in stock good ones. So, let's trumpet the good deeds of those that are committed to doing good in our societies. By so doing, others will emulate their shining examples and the trickle down effect will be tremendous.

When and where did you hear, a certain CEO of a certain hiring company turned down his or her relative(s) application on the basis of conflict of interest?

Well, if you'd that's rare. And I'm not sure it happens a lot in our part of the region-- where nepotism is as permanent as the Pyramids of Egypt. For example, we employ our sons, daughters, girl/boyfriends when some of them don't even qualify for the job. And that's the reason we're having this conversation today.

Mr Domelevo told a gathering how he avoided a potential conflict of interest situation by discouraging his son from applying for a job in the audit service.

According to him, his son wanted to apply for a job at the Auditor General's department early this year when vacancies were advertised but he advised him to only apply when he retires as A-G.

Speaking at a national dialogue on public accountability organised by the National Commission for Civic Education (NCCE), Mr Domelovo admonished public officials against recruiting their relatives because it amounts to a conflict of interest.

This is the AG: "Well I talked about meritocracy and let me say that, for instance when it comes to my profession, the auditor; there is the saying that the auditor should not only be independent but should be seen to be independent. I hope you get me?"

"Early this year, we were going to recruit some people to Audit Service and my son who is almost a chartered accountant with Masters said daddy can I apply? I said to who! You want to apply to me?," Mr. Domelevo recounted.

The AG's son would question his father's reasoning. Here him again:

"He said, but am I not a Ghanaian? I said yes, you are a Ghanaian but you don't qualify because I am here. I can't employ you."

The AG noted, his decision was not fair but he felt that employing his son would result in a situation where the existing staff of the service would be afraid of correcting and teaching his ward.

"It's not fair but I explained to him, you see you may be qualified but if I bring you here, your future is damaged forever because everything he does people will not correct him, they won't teach him, you will not be the professional that you want to be, given the society in which we are. So wait, I will throw you outside there and then you will grow, when I leave in two years time you can apply and then you come and they will give you the teaching that it takes".

Did you miss that? .." Wait I'll throw you outside there and then you'll grow."

So profound isn't it? Folks, the 'Saints' still dwelleth amongst us.