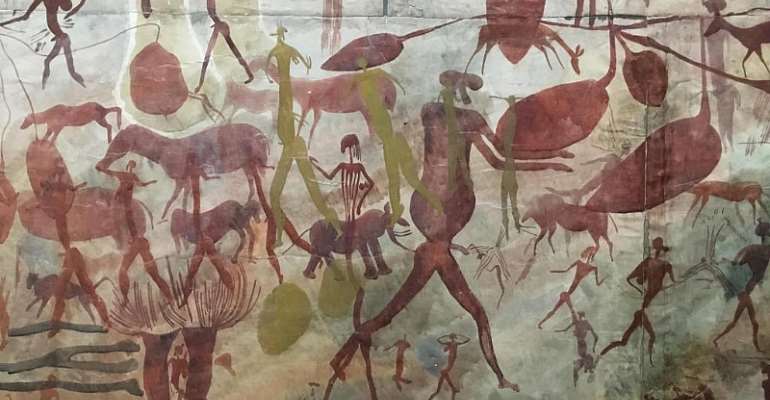 Prehistory is a modern discovery for modern times: this is one premise of an exhibit at the Pompidou Centre in Paris this summer that explores how growing knowledge of humanity's past shapes views of its uncertain future.

As its title suggests, the exhibit Prehistory: A Modern Enigma emphasises its own mysteries and contradictions.

Throughout, the discoveries of huge spans of time before recorded history, even prior to the appearance of humans, reflects the crises of meaning and existence articulated in modern and contemporary culture.

“Prehistory is much too long, obscure and unfathomable to be explained in a narrative,” says one of the exhibit's three curators, Rémi Labrusse, who is also professor at art history at the University of Paris at Nanterre.

“It opens the door completely to a more poetic relation to the world. ”

When the term “prehistory” appeared in 1860, it gave rise to reflection on a world that had seen many ages before humans appeared.

And if any theme dominates the modern response to these discoveries, it is that of humanity's waning significance.

“Suddenly, man becomes a very little thing in the whole world and its enormous history, including its natural history,” says Labrusse.

From prehistoric cave to modern museum
Just as important to the exhibit is the discovery that prehistoric humans were artists, capable of highly evolved artworks.

“It was a complete contradiction to the ideology of symbolic and mental progress,” Labrusse says.

“Techniques have evolved and improved, of course,” he continues. “But in terms of meaning, invention and the creative power of man, suddenly it appeared that man had always been the same, more or less, and had created wonderful works of art without any sort of technical sets or systems at hand.”

The influence of drawings, paintings and engravings such as those in the Altamira cave in Spain and the Lascaux and Chauvet caves in France helped make caves into what the exhibit presents as the space par excellence of prehistory.

This holds not just for the artworks, but also for the way the caves' existence stretches before historical time and, since these particular sites are closed to the public, continues to do so today.

“They're like contemporary shrines, hidden and forbidden,” Labrusse says. “The fact they are closed is explained by the necessity of conservation, but it is also a way for us to preserve them as a sort of magical space.”

Prehistoric origins of the climate crisis
The discovery of a time on earth prior to humans also opened up the idea of humanity's possible extinction, and the exhibit explores how humans have envisioned their own fate.

These visions range from the decimation of civilisation around the first world war to the nuclear apocalypse of the second, before coming now to the threats posed by climate change.

“At the beginning of the third millenium, we are facing the possibility of our own extinction, as everyone knows, because of ecological crisis, which makes us all responsible for our own future, or non-future,” Labrusse says.

For this reason, many works of contemporary art and culture look to the passage from hunter-gatherer societies of the Palaeolithic age to the agrarian cultures of the Neolithic, a turning point in humanity's influence over the environment.

“What comes first now is the idea that we have taken a path from the Neolithic, when we became sedentary, and it is the wrong path,” Labrusse says.

“But what can we turn back to? To something we cannot really define, explain or see clearly, the long-term civilisation of the Palaeolithic in which history did not prevail. That's something we really dream of today, even though it's completely utopian.”

The suggestion of the exhibit, then, grapples with something set in course long before recorded history.

“That's the way we try to show it in works of contemporary artists, who are hesitating between the melancholy of collapse and the energy of revolution,” Labrusse says.