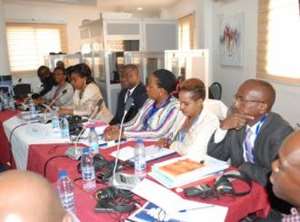 The call was made by experts from the Subregional Office for Central Africa of the UN Economic Commission for Africa (ECA), others from the ECCAS General Secretariat and the CEMAC Commission, and representatives from 11 countries that straddle these economic communities, during the first meeting of the Boosting Intra-African Trade (BIAT) Regional Taskforce for Central Africa, held in Douala, Cameroon.

According to the experts, with the fast-approaching operationalization of the AfCFTA, Central African States, just like countries belonging to other regional economic communities, needed to carefully consider totally shielding certain goods and partially protecting others from free trade as part measures towards maintaining a certain level of stability in fiscal income, food security and the promotion of industrialization.

Examples of excluded goods proposed are meat, fish and cocoa; while some goods considered sensitive include live poultry, crude palm oil and milk.

The meeting noted that the situation is complex for Central Africa, given that many countries in the subregion have based their inventory of free, sensitive and excluded goods on a template called HS12 (The 2012 World Customs Organization’s Harmonized System) which is no longer in force as per the latest advice of the African Union Ministers of Trade. The trade ministers recommend that product categorization must be based on the template code-named HS17, hinged on their external trade records from 2015 to 2017.

Work is going on in several quarters for updated data on this dossier to be available for review during the technical meetings of the 12th Extraordinary Summit dedicated to the AfCFTA on 7 July 2019 in Niamey, Niger.

Due to tight deadlines, the Douala meeting advised that CEMAC member States (who are also members of ECCAS) having the same tariff regime, to propose a collective list of products while the other countries belonging exclusively to ECCAS, present their bids of product categorization, individually, in the meantime.

While, underscoring the importance of BIAT to facilitate the project of an African common market through seven practical pillars, and congratulating countries of the Central African subregion on elaborating the BIAT plan of action and constituting a taskforce for following it up, the ECCAS Deputy Secretary-General in charge of Physical, Economic and Monetary Integration, Ms. Marie Therese Chantal Mfoula, reminded member States that rolling out the AfCFTA was the ultimate trophy in sight, hence the need for all countries in the subregion to ratify its framework agreement.