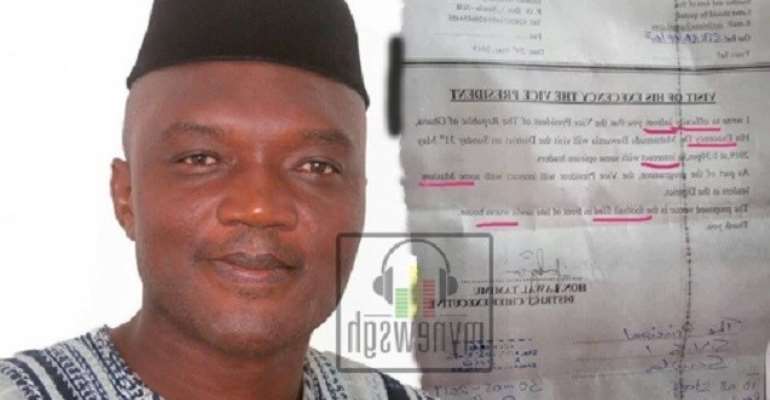 The District Chief Executive (DCE) for Sawla-Tuna-Kalba, Lawal Tamimu has finally reacted with excessive rage over an error-ridden letter which was announcing a visit by the Vice President, Dr. Mahamudu Bawumia to the District a month ago.

The horrible letter dated 29th May 2019 which went gone viral on social media and subsequently being discussed widely in the media circles, according to the angry DCE, was referred to the police by the management of the assembly for thorough investigations to uncover the perpetrators.

Mr. Lawal Tamimu in a statement issued to the media and signed by the Public Relations and Complaints Officer of the Sawla-Tuna-Kalba district assembly, Mr. Abu Ibrahim said the ‘fake letter’ was a calculated attempt by some saboteurs in the area who are only bent on tarnishing his hard won reputation and cause embarrassment to his administration [the assembly].

He questioned why and how a purported official letter from the District Assembly inviting dignitaries and key stakeholders for the occasion of the historic visit of the Vice President was not written on the official letterhead of the assembly.

He said per administrative procedure, every official letter of that magnitude from any Assembly is written by the District Coordinating Director on official letterhead, which bears the national coat of arms before it’s signed by or for a DCE.

“It must be stated clearly that the Hon. DCE left Sawla for Tamale on 28th May 2019 to attend a meeting of MMDCEs with H.E. the Vice President and the Hon. Ministers of Northern, Savannah, North East Regions slated for 29th May 2019. The District Coordinating Director was also in Tamale the very day the said letter was written and distributed”.

When contacted, the DCE, Mr. Lawal Tamimu maintained that the signature on the said ‘fake letter’ did not also represent his real signature.

“The signature on the said letter is not mine and the letterhead is also not from the assembly. The letter was forged to tarnish my reputation as DCE by some individuals who have personal interest in the position I occupy,” he intimated.

Meanwhile, the residents of Sawla-Tuna-Kalba District believed to be those who opposed Mr. Lawal Tamimu during his appointment as DCE had gone to the media with copies of the said fake letter demanding the President, Nana Akufo-Addo to terminate his appointment.

Other residents who are also hailing the DCE for his commitment to the development of the Sawla-Tuna-Kalba district have not only rubbished the call for the termination of the appointment of Mr. Lawal Tamimu but also described the matter as “criminal”.

They said they fully back the decision by the Assembly to refer the matter to the police for investigations.