Senegal to Paris suburbs and dressing PSG stars, Correa has done it all 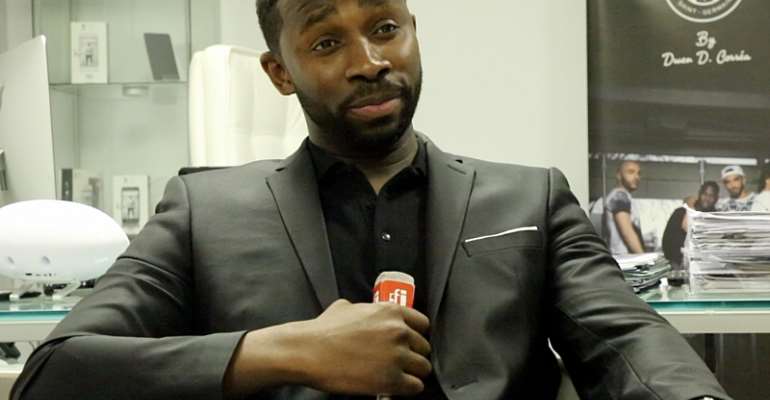 Designer and entrepreneur Dwen Correa was struggling to make a living when he got a call from a Paris Saint-Germain executive in 2015 asking if he would design a collection for the club. Now he is sought after by football stars in France and beyond.

Dwen Correa coaches two visitors in the art of sportswear design in his windowless office on an industrial estate to the north of Paris. He is surrounded by clothes racks containing numerous collections he has designed over the years.

“The one I am most proud of is this,” he says holding up a black tracksuit that has the name of his brand – DWN TWN - down the length of the arms and the legs. The collection is made in factories in Bangladesh, India, Tunisia and Turkey.

“When I began I didn't have so much choice because I didn't know the business. I had to learn a lot. I created a network of manufacturers who were good,” Correa explains before taking his eager visitors on a tour of his company's sizeable warehouse.

Humble beginnings
Correa was born in a village in Senegal to parents from Guinea Bissau. He came to France aged 5, and remembers “being in shock at Orly Airport where there were lots of white people.” He grew up in a deprived neighbourhood to the east of Paris, and was more into martial arts than football.

“I became interested in football when George Weah joined Paris Saint-Germain, and he agreed to have his photo taken with me,” remembers Correa. It was 1993 and like many teenagers Correa had no idea what line of work he would go into as an adult. And as is the case many young men with immigrant backgrounds in France, Correa went from one low-skilled temporary job to another.

Perturbed by a succession of dead-end jobs, Dwen decided to combine his love of football with his passion for fashion, and launched his own sportswear brand, DWN TWN. “Talent isn't enough to succeed in business, it mainly depends on having good contacts,” says Correa looking up at a photo of Joacim Ferdandez that takes pride of place on a cabinet in his office.

Top footballers
Ferdandez was a Franco-Senegalese professional footballer who grow up in the same suburb as Correa. Ferdandez introduced Correa to several top players, and from there he was able to persuade several of them, including Arsenal's Nicolas Anelka, to sign image rights contracts with his brand DWN TWN.

Most recently Correa has designed PSG's Justice League collection, in which players such as Cavani, Mbappé and Neymar double as WarnerMedia superheroes, Batman, Flash and Cyborg.

Correa's two visitors look on in amazement as he shows them the Justice League trailer. “There is a lot more to come,” Correa says as he rounds up the meeting. With transfer season in full swing, it is a busy time for Correa as he hustles for more image rights contracts.