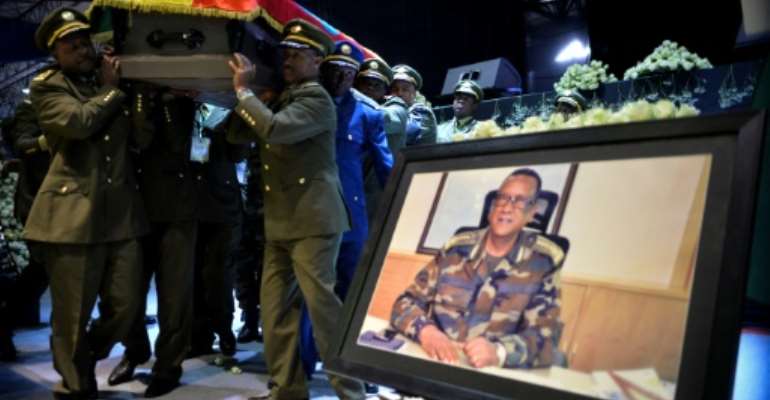 Members of the public and the military gathered in Addis Ababa on Monday for ceremonies to honour slain armed forces chief Seare Mekonnen. By Michael TEWELDE (AFP)

Tens of thousands of Ethiopians gathered Wednesday to mourn senior officials killed at the weekend in violence described by Prime Minister Abiy Ahmed's administration as a failed regional coup.

In Amhara, a northwestern state rocked by the murder of its president, attorney general and a top adviser, vast crowds gathered in a stadium in the local capital Bahir Dar for a funeral ceremony.

"The fallen will be remembered for generations to come for their contribution to the region and the whole country," said deputy prime minister Demeke Mekonnen, himself from the Amhara ethnic group, the second-largest in the country.

"We will find out the motives and interests of those who committed this barbaric act."

Demeke lay flowers before the three coffins, which were then to be taken to a local church for a religious service.

The authorities say the three were killed by a "hit squad" under the orders of Amhara security chief Asaminew Tsige, an ethno-nationalist reportedly facing removal over his attempts to form a militia.

Meanwhile in Tigray region, which abuts Amhara to the north, slain army chief Seare Mekonnen was to be buried following the arrival of his coffin on Tuesday evening which also drew tens of thousands.

Seare was shot dead by his bodyguard while leading the response to the attacks in Amhara on Saturday.

The attacks were 500 kilometres (310 miles) apart but the government says they were coordinated.

Asaminew had persuaded Seare's bodyguard to kill him, it says. However, details have been scanty.

Asaminew was gunned down by police on Monday while on the run.

Since taking office in April 2018, Abiy has been pushing through democratic reforms that have been lauded abroad but unleashed turbulence at home.

In a statement Tuesday, the International Crisis Group said the reforms had come at a cost, weakening the once all-powerful ruling EPRDF, a coalition of four regional parties that has ruled with an iron fist since 1991.

Security reforms have reduced the number of top officials from the Tigray People's Liberation Front (TPLF), representing the minority Tigray who had long dominated the party and were seen as marginalising the other major ethnic groups.

The changes have also led to a surge in ethno-nationalist parties in Ethiopia's nine autonomous regions, challenging the traditional parties ahead of elections planned for next year.

"The heightened ethno-nationalist rhetoric contributes to intercommunal violence, which over the past eighteen months has reached levels unprecedented in many decades in Ethiopia," the ICG said.

Over two million people have been displaced in violence along the borders of the regions, which divide the country along ethnic lines.

"The most pressing threat is that the 22 June killings could trigger intensified power struggles and violent reactions in politically sensitive locations across the country," said the ICG.