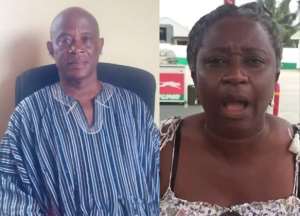 Osaberima Asante Frimpong Manso, Chief of Akyem Apedwa in the Eastern Region is in tussle with a developer called Tina Duah Agyemang over a piece of land around Apedwa Junction on the Accra Kumasi Highway.

The chief is claiming the developer is using the names of powerful people in government including the President to forcibly 'steal' the land for her project.

According to the chief, the land which was once given to the Ghana Broadcasting Corporation in 1954 has not been in use in the past 30 years and the developer is taking advantage of her purported 'closeness' with people in authority to usurp the land.

The chief said their decision not to make the land available to the developer is because they are going to use the same space for the construction of a stopover in their bid to develop Apedwa, having awarded the contract to some people three years ago.

“I saw the woman working on the land and I asked her the reason why she is using the land without his notice, she told me it is the president who told her to come for the land. She said no one can stop her from initiating her project because when the president speaks it’s final!” adding “I want to know from the President if indeed he has sent the woman to embark on such uncalled for behavior.”

The chief said he has reported the case to the Suhum Police Command after the developer allegedly engaged the services of landguards to disturb the peace in the area.

The Queen Mother of Akyem Apedwa, Nana Asantewaa Aboagyewaa also added her voice to the case saying after asking the developer to consult the chief for the land they realized later that she was developing it without their consent.

Later when Daily Guide contacted the developer, she declined comment except to say that the chief of Apedwa is not the rightful occupant of the stool.

She also said she does not recognize him and added that the Chief cannot tell her what to do since he is not the owner of the land.