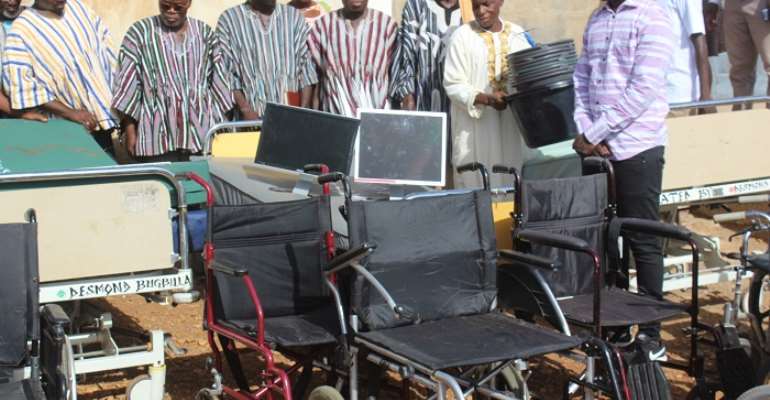 Some of the items presented to the health centreS

The management of the Sapeliga Health Centre in the Bawku West District of the Upper East Region is calling for immediate intervention to save the facility from collapsing.

The health centre was built some decades ago, yet no massive renovation work has been done on it in order to make it safe for patients.

The administrative, out-patients departments (OPDs) and some wards have serious cracks in them, heightening fear among some patients.

It has taken so much effort by the facility’s management and staff to keep bats away from occupying the ceiling of the health centre.

On equipment and other healthcare needs, the Sapeliga Health Centre depends largely on the benevolence of well-to-do natives and philanthropists to complement what they receive from the district and Regional Directorate of the Ghana Health Service (GHS).

Recently, a native of the area and former District Chief Executive (DCE) for Bawku West, Desmond Bugbilla, donated some health equipment and other supplies to the health centre.

This is the second time Desmond Bugbilla has donated items to the health centre.

Speaking on behalf of the District Health Directorate, an internal auditor at the directorate, Ebenezer Agbalenyo, said the donation to the health centre is a direct response to the current situation of inadequate medical equipment and supplies to cope with the volume of healthcare cases that come to the facility on daily basis.

He lauded the former DCE's efforts at contributing to the healthcare delivery of the area.