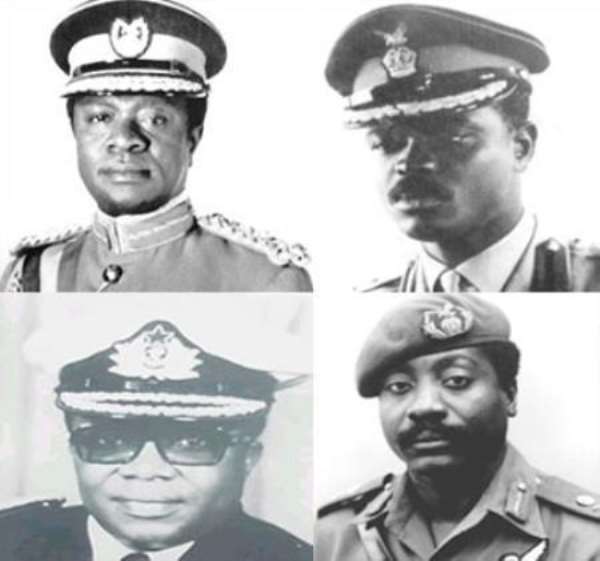 Families of Senior Military officers who were executed during the June 4th 1979 revolution would be holding a memorial programme Thursday June 27, to mark 40th Anniversary.

They were execution by the Armed Force Revolutionary Council (AFRC) in 1979 for acts of corruption.

The three army Generals were lined up at the Teshie Military shooting range and shot for corruption after Flt. Lt. Jerry John Rawlings now founder of the National Democratic Congress (NDC) had led a bloody coup against General W.F.A Akuffo junta on June 4th 1979.

A short biographies and memoirs of the officers, accompanied with short poems have been released to the media, as part activities to mark the 40th Anniversary.

The memorial which is scheduled to come off at the St. Catherine’s Catholic Church in Burma Camp to observe the memories of the slain officers is on the theme; “NEVER AGAIN.”

Five years ago, the families held the 35th anniversary of the senior executed military officers which was captured on the theme; “Love, Forgiveness and Thanksgiving.”

“We, the Children of the Senior Military Officers who were killed during the June 4th Mutiny in 1979 are gathered to hold a 40th Anniversary Thanksgiving and Memorial Service to honour our fathers."

“We would like to stress that NEVER AGAIN should the circumstances and aftermath of what happened to us ever happen to any family in our beloved country,” the families and children stated in a press statement.

The Rawlings led coup, was did not started as a takeover but act of positive defiance against corruption and injustice against the Akuffo's military dictatorship, which had come into being after Akuffo had overthrown another dictatorship of Kutu Acheampong in what many described as a palace coup within the Supreme Military Council (SMC).

Acheampong had earlier become Military ruler by overthrowing the democratically elected Government of K.A. Busia, which had in turn been democratically installed for Ghana’s second Republic after Afrifa had collaborated with others to overthrow the first republican government of Osagyefo Dr. Kwame Nkrumah.

When a young Flt Lt. Jerry John Rawlings had organized the demonstration against the Akuffo junta, he had done so in tone with the mood of the country which was disenchanted with SMC.

The Akuffo led junta, would however not accept the peaceful demonstration and so arrested Jerry Rawlings and his colleagues and have them placed before a kangaroo court.

The Akuffo's junta had wanted Rawlings’ punishment to be deterrence to other people who harbored any desire of going against the junta and so telecasted Rawlings’ trial live.

This was however the junta’s undoing, because a passionate Rawlings, after enumerating all the wrongs in the country managed to move an already angry nation to his side when he said the court should let the rest of the demonstrators go and deal with him alone. This birthed his nickname, “Junior Jesus.”

After he had been condemned and thrown into jail however, junior ranks of the military organized and sprung him out of jail and escorted him to the Ghana Broadcasting Corporation where he announced the overthrow of the Akuffo junta.

Jerry Rawlings in his Telecast to the nation, explained that the three military Generals and six other officers who were eventually executed had fallen victim to mob anger among junior rank soldiers who would have gone on rampage and killed at will if Rawlings had not buckled to pressure to give them out for execution.

Some weeks ago, former Rawlings again led supporters to mark the event as a memorial for heroes and their ideals.