Kwesi Pratt Should Actually Be Happy with This New Market Trend 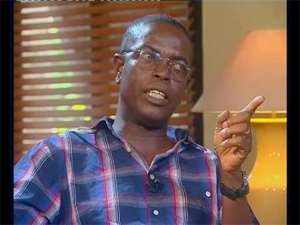 The news headline was captioned “Buying Items Requires NDC & NPP Cards – Kwesi Pratt Reveals Worrying Trend” (Peacefmonline.com 6/14/19). It was not accompanied by any news article, as would usually be the case. Instead, there was a blown-up photograph of the journalist Mr. Kwesi Pratt, Jr., the Editor-Publisher of the “Insight” newspaper. Directly underneath the aforesaid photograph was an embedded videoclip showing an aerial picture of Mr. Pratt with two other interlocutors in one of the studios of Peace-FM Radio Station. The host of the program, “Kokrokoo,” Mr. Kwami Sefa Kayi, was pictured in a much smaller framed insert in the top-right-hand corner of the monitor. All three talking-heads had stacks of newspapers in front of them on the fairly large desk positioned at the center of the studio, around which they all comfortably sat.

Mr. Pratt alleged that he was recently either at a bakery or the home of a woman who sold bread. It was not clear to yours truly whether the Editor-Publisher of the “Insight” newspaper had gone there to buy a loaf of bread or not. But Mr. Pratt claimed that a would-be buyer was asked about his/her political affiliation, and when it turned out that the latter did not share affiliation and/or membership of the same political party, in this particular instance, the ruling New Patriotic Party (NPP) with the seller, the seller would not sell the would-be buyer the loaf of bread or two that s/he needed. Well, three comments were attached to the aforesaid videoclip embedded to the website of Peacefmonline.com that I thought was worth sharing with my readers. The one that I loved the most had been authored by somebody going by the name of “Lamptey.” I had absolutely no way of knowing whether “Lamptey” was the name of a man or a woman; nevertheless, the poignancy of the language and its politically charged nature stereotypically informed me that very likely, it had been written by a man.

At any rate, this was what the commentator had to say: “This is the highest degree of hypocrisy in this country. Is that a new phenomenon?” It was quite obvious that Mr. Pratt had presumed to cavalierly impugn the long-term memory capacity of most Ghanaians. Author Lamptey went on to wittily deliver the punchline as follows: “The truth is that it was the very first time that Nkrumah took over the leadership of Government Business in the early 1950s that this canker was introduced to The Gold Coast, now Ghana. It affected the allocation of state resources to favor his accolades [sic].” It is quite obvious that Author Lamptey meant “acolytes,” not “accolades.” The critic/commentator continues, “This [policy agenda bias] was seen in [the] siting of factories, schools, regional capitals, supply of utilities across the country. But who is your mentor, Mr. Pratt? You have never seen anything wrong [with] Nkrumah, yet this [is] one of the seeds he planted and nurtured for posterity.”

I also loved this first response to Mr. Pratt’s comments decrying the pathological divisiveness of Ghana’s political culture, and pseudonymously signed “Obi Ba.” I have slightly edited the following for easy readability: “Never take Kwesi Pratt seriously when he plays his populist game of pretending to be neutral by blasting NPP and NDC [leaders] alike, especially when it borders on an issue that ought to be solely blamed on the NDC for its diabolic implications and ramifications. In such instances, Kwesi Pratt feels more comfortable hiding behind populism by ‘neutrally’ condemning both NPP and the NDC, his paymaster.” I quote these two terse and poignant ripostes to the brazen hypocrisy of Mr. Pratt because I could not have written a better response to the same. I also believe that very likely, Mr. Pratt’s hypothetical bread seller, if it has any reality or verifiability in truth, at all, was a bona fide member of the presently main opposition National Democratic Congress and not the ruling New Patriotic Party.

In the recent past, the Editor-Publisher of the “Insight” newspaper has made comments that left the reader or listener with absolutely no doubt as to precisely where he stood on the political divide, so-called. For example, in the leadup to the 2016 general election, this perennial fixture on the talk-radio circuit categorically stated that he would be asinine and an arrant fool to ever think of either campaigning for or making any public remarks that could be grossly mistaken to represent his support or endorsement of the Akufo-Addo-led then main opposition New Patriotic Party. We must also emphatically observe that under the leadership of President Kwame Nkrumah, one had to be a card-carrying member of the ruling Convention People’s Party (CPP) to obtain a job at any one of the then three Ghanaian public or universities, or to get hired in the country’s civil service. Indeed, we have come to far to be facilely fooled by suave-operating political scam-artists like this Agona-Nsabaa native.

The author has 5214 publications published on Modern Ghana.