The Recent Letter From The Palace Of Chief Sulemana Salaga IV 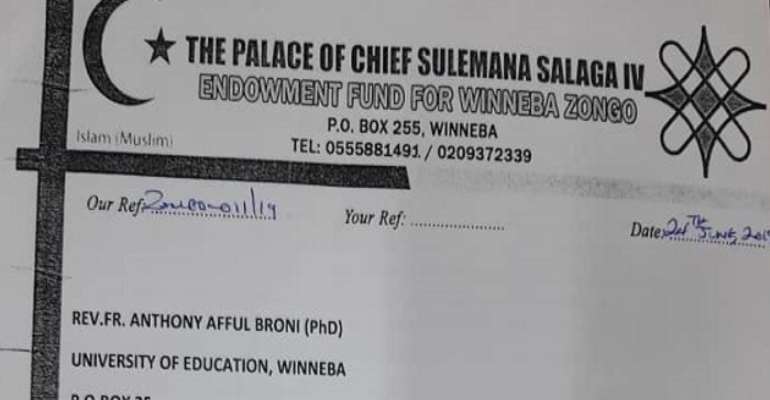 I read with shock and utter dismay a letter that emanated from Effutu Zong Chief that has been published both on myjoyonline and Ghanaweb.com. In the said letter, the zongo chief among other things alleged that, The current VC of UEW, Professor Anthony Afful Broni attempted to use his palace as a means of subverting the constitutional probity and accountability in respect of my earlier petition to the Auditor General to have some questionable item of expenditure disallowed with a surcharge pursuant to Article 187(7)(b) of the 1992 constitution of the Republic of Ghana.

Readers would recall that, in March,2019, my outfit submitted a case against Professor Anthony Afful Broni in view of the fact that, he personally benefited from the GHC 5.7m criminally expended on fraudulent honorarium as a recurrent expenditure only in six weeks.

As a petitioner in the said case, I owe it a duty to set the records straight and to call on appropriate investigative agencies to take this aspect of the matter raised by the Effutu Zongo Chief for possible investigation(s). Again, as an ardent admirer of the doctrines of the catholic church due to my secondary education in St.Mary's Boys' Senior High school in Takoradi, I would like to use this medium to call on the members of the catholic Bishop conference in Ghana to as a matter of urgency, consider a possible inquiry into Professor Anthony Afful Broni's conduct which has become an ordained catalyst eroding the oustanding and enviable principles of the catholic church.

Let me make it clear that, immediately I submitted the petition to the Auditor General with the relevant appendix as evidence of my claim, Mr Daniel Yaw Domelevo without delay deployed his team of Auditors to storm UEW main Campus where that fraud took place. As indicated in the letter, Professor Anthony Afful Broni upon "seeing the team of Auditors" quickly without shame went to the Effutu Zongo chief for him to intervene just to get the exercise discontinued after failing to have some done on his behalf by Lord Commey who works at the Jubilee house.

As we speak, Professor Anthony Afful Broni is the first catholic priest in the world to have been dragged before three state institutions for possible prosecution for allegedly engaging in an obnoxious act of thievery that deprives a university community possible infrastructure and other valuable things enough to enhance growth in academic work.

Reference is hereby made to a letter written by the deputy special prosecutor acknowledging receipt of the case we filed on 10th June,2019 against Professor Anthony Afful Broni for him to stand criminal trial.

A faithful, honest and a sincere catholic priest should not be going through this hustle and tussle but hey, Reverend Father Afful Broni has proven to be in possession of the features of a notorious bandit and a gangster in cassock.