In the heart of the metropolis, a king of Nigeria's herder Fulani 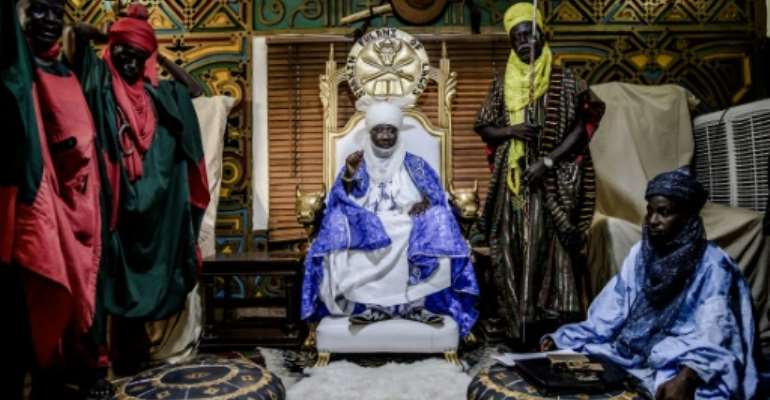 The Sarkin Fulani of Lagos sinks into his white upholstered throne, lays a hand on the sculpted golden cow head that forms the armrest and scans the subjects gathered at his feet.

He is also a king.

The Sarkin Fulani of Lagos is one of Nigeria's most influential members of a mainly Muslim community of nomadic herders from the far north, at a time when relations with the country's largely Christian farmers are deteriorating.

Fulani men at the gathering at the Sarkin Fulani's palace in Lagos' Surulere district. The Fulani have a proud tradition as cattle herders but most of the men are urban. By Luis TATO (AFP)

All of those waiting for an audience to air their problems in Bambado's cramped assembly room are ethnic Fulani-Hausa, two closely-tied northern ethnic groups.

But few of them know the herding life.

Fulani-Hausa now make up around a quarter of the population of Lagos -- around five to seven million people -- in the ethnically Yoruba-dominated south of Nigeria.

The congregation is overwhelmingly urban -- district chiefs kneel alongside the representatives from the ranks of the "okada" motorcycle taxis and the beggars who wander between the racing traffic in downtown Lagos.

"I am here to solve their problems," said Bambado, a thick-set man with a Mercedes 4x4 who himself does not fit the stereotype of the weather-beaten wanderer.

Their problems are centred on the push and hustle of life in Nigeria's frenetic economic capital.

A money-changer was kidnapped and murdered. His family does not trust the police, and begs the influential chief to follow up on the investigation. He says he will.

There are land disputes, family quarrels, beatings and armed robberies, all brought to the chief for advice and help. He has no official powers, but when he speaks, the police and politicians listen.

Taking counsel: Clad in his traditional turban, the Sarkin Fulani discusses issues with his assistant. Stigma is one of the biggest problems facing Fulani today, the king says. By Luis TATO (AFP)

"He is a good man. When something serious happens, even if he is travelling overseas he always picks up his phone. And if it is necessary, he flies back to Nigeria," says Suleiman Ibrahim, a trader who has come to Bambado to adjudicate a family feud.

Indeed, the time Bambado spends on his gilded throne in his somewhat ramshackle palace in Surulere, the popular residential district of Lagos where he lives, is just part of his busy schedule.

The married father-of-three often travels for work and spends around half the year in London and Dubai on business.

The Fulani seem to be a people without borders -- the wider community is estimated at between 30 million to 40 million scattered across fifteen countries from Senegal to the Central African Republic.

In the north, every city has a Sarkin Fulani or a Sarkin Hausa.

Officially, Bambado's authority extends only to the borders of Lagos, but his influence spreads wider and he is a powerful player in Nigeria's political mosaic.

That position has become increasingly important in recent years as conflicts between Fulani and sedentary farmers have swept Nigeria's fertile central region.

The assembly offers people the chance to turn to the Sarkin Fulani for help and advice - he has no official powers but wields much influence. By Luis TATO (AFP)

The bloodshed has been stoked by demand for water and access to land, driven in part by a surging population in a country of 200 million. The Fulani have also been accused of "terrorism" and aggression.

"Anywhere you see a Fulani man, people see them as killers," said Bambado.

"But it is not true. A Fulani man is a wonderful person, he accommodates, he likes his people, he likes his neighbours, he interacts, he is a very social person. But you know what? There is no society that has no bad eggs."

Bambado's grandparents were from an educated, religious family and were among the first migrants to leave the arid northern state of Jigawa and travel south at the beginning of the 20th century.

They eventually settled on the Atlantic coast and his grandfather, a trader in kola nuts and gold nuggets, increasingly became a linchpin of the Fulani community.

"When people from the north stayed in Lagos, he was the one to welcome them. They became more numerous. So one day, they decided that they needed a leader: my grandfather," said Bambado, who inherited the title when his father died in 1994.

The first Sarkin Fulani of Lagos balanced his royal duties with diversifying his business interests, investing in the cattle trade and the docks.

When he is not fulfilling his role as the Sarkin Fulani of Lagos, Mohammed Abubakar Bambado is a businessman, here meeting with a partner at his office in Apapa district. By Luis TATO (AFP)

He set up a port handling business, using "brothers" as labour, which has passed from father to son -- like the Sarkin title -- for three generations.

Bambado has continued in this tradition and Dockworth Services International now employs 1,500 people.

He is also a central figure in the meat market in Lagos, which is the key sales hub for the cattle reared across the north and centre of the country.

Time for TV: The Sarkin Fulani relaxes with his family. By Luis TATO (AFP)

He even keeps a herd of around 300 cattle on the outskirts of the city to keep him tethered to his heritage.

And despite his travel schedule and the wide dispersal of his community across multiple countries, he remains loyal to his birthplace.

"I am a Lagosian first and foremost," he said.