Hunger for beef offers rewards and risks for Nigeria's pastoralists 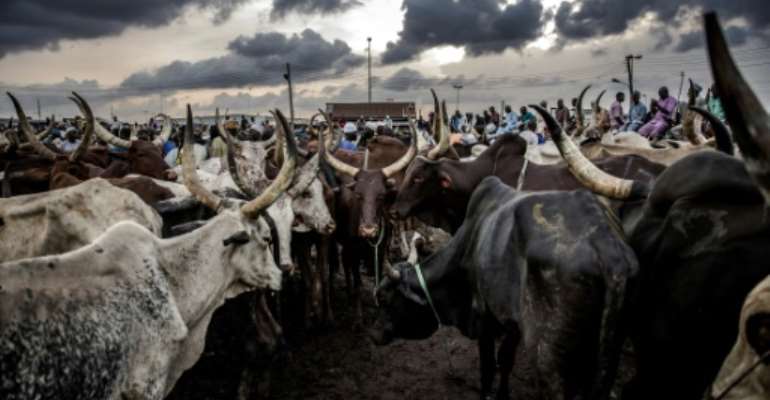 Per-capita beef consumption in Nigeria is expected to rise fourfold within a generation. By Luis TATO (AFP)

With over 200 million people and an emerging middle class, Nigeria is witnessing a boom in demand for meat that offers potential but also risks for the semi-nomadic herders who provide most of its beef.

According to government estimates, Nigeria, consumes 360,000 tonnes of beef each year, accounting for half of all West Africa.

In per-capita terms, consumption is low compared with advanced economies, but it is growing fast, and expected to quadruple by 2050.

Today, most of the demand is met by pastoralists from the ethnic Fulani group, who follow time-honoured techniques of raising cattle, driving them south to pastures and taking them to market.

During the dry season, the herders come down from the arid Sahel to the fertile plains of central and southern Nigeria, seeking water and pasture for their livestock.

The millennia-old activity has been thrust into the spotlight in recent years because of worsening confrontations with sedentary farmers over access to land and water.

Clashes have claimed 7,000 lives over the past five years and cost the Nigerian economy $13 billion (11.57 billion euros) annually, according to a report in May by the NGO Mercy Corps.

The friction has roots dating back more than a century. Droughts, population growth, the expansion of sedentary farming into communal areas but also poor governance have all played a role.

Such neglect has pastoralists feeling isolated, according to Ibrahim Abdullahi, secretary of Gafdan, a national union of herders.

"Nothing was done to implement the grazing reserves designed by the law in the 1960s -- most of the land has been sold and is now cultivated by farmers who grow crops," he said.

Nomadic herders also find themselves far from the channels of the meat trade, while many markets and outdoor slaughterhouses lack basic sanitary conditions, such as running water, animal shelters and cold storage rooms, he said.

"At all the levels of government, the livestock sector was always marginalised in favour of agriculture. Some states still allocate less than two percent of their budget to livestock," he added.

As Nigerians clamour for meat, can this ancient practice -- with its long supply chains, climate risks and social tensions -- compete against sedentary farming, which has high productivity and lower risks?

Jimmy Smith, director of the Institute for International Research on Livestock Farming (ILRI), based in Nairobi, argues that the system can not only survive but also flourish -- in the right conditions.

Ancient and modern: Pastoral herding in Nigeria has a future, provided it gets infrastructure support and help to boost productivity, say experts. By Luis TATO (AFP)

"Pastoralism has been established for millennia -- in the past we've seen it's a very efficient system if you look at the input/output relationship. Very little is invested, but a reasonable amount is harvested," he told AFP.

This model can prosper if the right support is put in place, he said.

"For example, it is possible to grow more forage and grain in sub-humid zones to create and develop feed markets for livestock based in northern areas, where it's dry."

"One animal which can give two litres (3.6 pints) of milk today could give 10 litres in the future."

The government is mulling several plans to boost cattle raising and ease tensions over access to land.

A Fulani man waits with his camels at a cattle market in Sokoto state, the last Nigerian town before the border with Niger. By Luis TATO (AFP)

They include initiatives for the creation of "cattle colonies" -- dedicated areas where pastoralists can graze their animals and have access to veterinary and other care.

But these schemes are expensive and have already drawn flak from Nigerian states, which oppose handing over land for this use.

Another idea, for encouraging ranching, is doubted by agricultural experts. They point to a long list of past failures, during the French and British colonial period, to set up high-productivity "modern farms" in West Africa.

Nigeria has considerable livestock -- nearly 20 million cattle, 40 million sheep and 60 million goats -- but about 30 percent of slaughtered animals are purchased from abroad, mainly from neighbouring Cameroon, Chad, Mali and Niger.

Often the herds are driven for hundreds of kilometres (miles) to be sold at border markets like Illela, a trading post between Niger and Nigeria.

The animals are then trucked to the cities, where they are sold again, slaughtered and butchered.

The Fulani's ancient lifestyle is often out of sync with the mobility and pressures of the 21st century. By Luis TATO (AFP)

"As it is now, there's no way Nigeria can produce all the meat and the milk it needs for its growing population," said Smith.

"A significant proportion of animal source food demand will most likely continue to be met by importation."

Nigeria's hunger for meat is likely to be replicated across Africa, if expectations of population and income rise hold true.

The UN's Food and Agriculture Organization (FAO) estimates the continent will experience a doubling in consumption of beef, pork and chicken between 2015 and 2050.

With most of the meat consumed in Africa still coming from pastoralism, Smith said, "All we need is to modernise it."