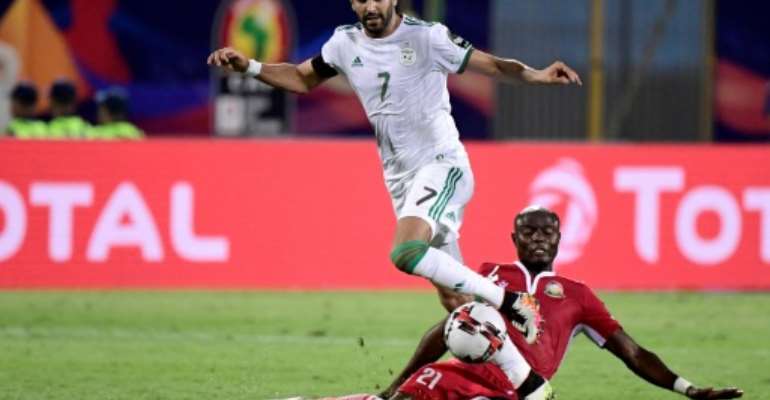 Algeria and Manchester City winger Riyad Mahrez takes the ball past Kenyan Dennis Odhiambo in an Africa Cup of Nations match won 2-0 by the Desert Foxes. By JAVIER SORIANO (AFP)

Riyad Mahrez and Sadio Mane resume an English Premier League rivalry Thursday on a different stage when Algeria and Senegal clash at the Africa Cup of Nations in Egypt.

Algerian winger Mahrez was part of the Manchester City team that pipped Senegalese forward Mane and his Liverpool team-mates in a thrilling title race last season.

Now the stars swap the Etihad Stadium and Anfield grounds of their clubs for the 30 June Stadium in Cairo, and a Group C showdown likely to decide who tops the final standings.

While both countries seem sure to qualify for the round of 16, topping the table would theoretically offer less formidable opponents in the first knockout stage.

Here, AFP Sport previews a Group C double-header that includes an east African duel between Kenya and Tanzania, plus a Group B meeting of newcomers Burundi and Madagascar.

While supporters, the media and publicists focus on Mahrez and Mane, Algeria coach Djamel Belmadi is less happy with that situation.

"I am not in favour of highlighting individuals over teams," said the former Manchester City midfielder. "We must put less emphasis on Riyad."

Belmadi was much happier when recalling a winning start for his team with Baghdad Bounedjah and Mahrez scoring in a routine 2-0 victory over Kenya.

"Collecting maximum points from our first match meant a lot because Algeria have a history of poor starts at the Cup of Nations."

Mane returns after a suspension ruled him out of the 2-0 win over Tanzania and coach Aliou Cisse says he is happy, particularly with the half-volley goal of 20-year-old Krepin Diatta.

Tanzania coach and former Nigeria star Emmanuel Amunike reacts during a 2-0 defeat by Senegal in the Africa Cup of Nations. By Khaled DESOUKI (AFP)

Tanzanian lawmakers who travelled to Egypt for the Senegal match returned home unhappy with the diet and allowances of the national squad coached by former Nigeria star Emmanuel Amunike.

"It is important for our footballers to have enough food to face a team like Senegal," said parliament speaker Job Ndugai.

Opposition member Pascal Haonga said: "Paying a derisory per diem is partly responsible for the loss. According to our information, they each receive $100 (88 euros) instead of 300."

Amunike had a different take on the defeat: "We lacked the experience and quality of Senegal, made a lot of mistakes and were naive."

This battle of countries making their first appearance at the Cup of Nations has huge significance for both the Burundian Swallows and the Malagasy Barea (prized cattle).

Ordinarily, it would be a dead-rubber given that Nigeria and Guinea are expected to occupy the top two positions in Group B and secure automatic qualification for the round of 16.

But with four of the six third-place teams in Egypt also advancing after the tournament was expanded from 16 teams to 24, Burundi and Madagascar have it all to play for.

Burundi were a well-organised outfit when losing 1-0 to a late Odion Ighalo goal for three-time champions Nigeria in Mediterranean city Alexandria.

Madagascar impressed going forward but were often suspect at the back when exceeding expectations by drawing 2-2 with Guinea, who lacked star Naby Keita for most of the match.

Ghanaians suffering due to mismanagement by Akufo-Addo, Bawu...
24 minutes ago