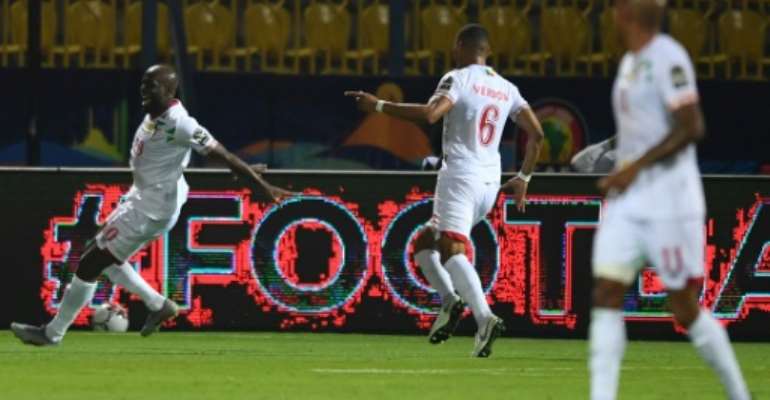 Veteran Benin forward Mickael Pote scored after 104 seconds and again in the second half as 10-man Ghana were held to a 2-2 draw Tuesday in a lively Africa Cup of Nations match.

Between the Pote goals, brothers Andre and Jordan Ayew netted in the opening half for Ghana, who had defender John Boye red-carded soon after half-time in Egyptian city Ismailia.

The last of the 12 first round games was also the most entertaining in the biennial tournament, which Egypt are staging after original hosts Cameroon fell behind with preparations.

Defending champions Cameroon scored twice within three minutes to beat Guinea-Bissau 2-0 earlier and they top the table with three points while Benin and Ghana have one each.

Ghana are the bookmakers' joint second favourites with Senegal, behind record seven-time champions Egypt, to win an Africa Cup enlarged to 24 teams from 16 in the last edition.

But 100/1 outsiders Benin, who have never won a Cup of Nations match, were never overawed by opponents who have lifted the trophy four times.

Instead of the caginess exhibited in many of the group matches since the opener last Friday, both teams attacked and this produced attractive football for the small crowd.

Pote darted on to a pass from midfield, held off the challenges of two Black Stars and poked the ball past goalkeeper Richard Ofori in a stunning start. 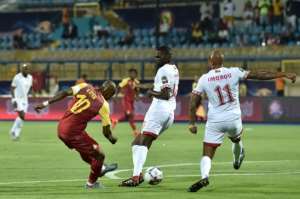 Ghana's midfielder Andre Ayew (L) shoots to score during the Africa Cup of Nations (CAN) football match between Ghana and Benin. By OZAN KOSE (AFP)

But Ghana took just seven minutes to level with one Ayew setting up the goal for the other as Jordan passed to Andre, whose low left-foot shot flew into the corner of the net.

Jordan put Ghana ahead three minutes before half-time by winning possession from a long pass, outpacing a defender and slamming a rising shot past Fabien Farnolle, another Benin veteran.

Ghana suffered a major blow 10 minutes into the second half when Boye was yellow-carded a second time by the Tunisian referee and sent off.

The numerical advantage emboldened Benin as they sought a first Cup of Nations victory after a draw and eight losses in three previous appearances, the last one nine years ago.

France-born Benin coach Michel Dussuyer responded to the situation by sending on substitutes Seibou Mama and Jodel Dossou after 62 minutes, and Pote equalised one minute later.

Following a corner, the ball was crossed low into the goalmouth and although Ofori got a hand to a close-range strike from Pote, he could not prevent the ball entering the net.

Ghana demonstrated they were far from a spent force on 70 minutes, with Farnolle making a brilliant save to push away a fiercely struck Thomas Partey free-kick.

Pote had a chance to complete a hat-trick two minutes from time and earn Benin a shock victory, but he hesitated inside the box and the chance was lost.