Who are we to rebuke Akua Donkor for advising Ghanaians not to trust Mahama? 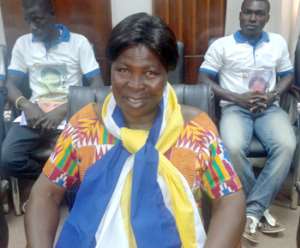 More recently, the firebrand founder of the Ghana Freedom Party (GFP), and a well-known admirer of former President Mahama, Madam Akua Donkor, audaciously came out and told the whole nation that she has rather regretted and felt ashamed for wasting her energy and resources over the years campaigning and defending the interests of former President Mahama, whom she would refer to as “wicked and incompetent” (see: ‘I regret campaigning for ‘wicked’ Mahama – Akua Donkor’ ; kasapafmonline.com/ghanaweb.com, 27/02/2019).

In fact, some of us were extremely dumbfounded when the outspoken GFP founder, Madam Akua Donkor, who before falling out with the former president, had always been referring to the outgone president as her son, and all of a sudden disowning Mahama and claiming that he is rather a ‘dishonest’ person, whom Ghanaians must be mindful of putting their trust in him.

Credible sources, however, had it that John Dramani Mahama and Madam Akua Donkor’s relationship apparently turned sour when the former allegedly seized the earlier gifts presented to the latter.

If you may recall, somewhere in 2016, Madam Akua Donkor joyously told the good people of Ghana that, her ‘son’, former President Mahama, had given her a handsome gift of a luxurious two bedroom bungalow and two four wheel drive vehicles, to be precise, Mitsubishi Pajero, as an earnest gesture of goodwill.

The conspicuously aggrieved Madam Akua Donkor recounted: “I told John Mahama that I don’t have money to buy land at Sakumono so when he started building the flats which at the moment is twelve floors complete at Sakumono, I gave him gold in exchange of a house within the flats. He later asked some persons to lead me to the flat and show me on which floor I’ll be staying and I later told the whole world that Mahama had given me a house. I stay in a hotel whenever I come to Accra so a few days ago, I decided to move into the house at Sakumono, but Mahama sent some people to stop me and turned round to tell me that President Akufo Addo doesn’t want me to stay in that building. That day I had to sleep on the compound of the MPs flat till the next day.”

“I’ve suffered a lot because of John Mahama, I’ve gone through hell because of my support for him. But now he’s stabbed me in the back and I regret ever campaigning for him. I feel so bad that I just can’t forgive myself (kasapafmonline.com).”

There is no gainsaying the fact that some of us were extremely disgusted when former President Mahama bizarrely doled out large portions of our scarce resources to all sort of apologists, including the founder of Ghana Freedom Party (GFP), Madam Akua Donkor, who in all honesty, contributed nothing meaningful towards Ghana’s advancement.

Ghana, to be quite honest, does not need a Father Christmas who would carelessly give away our hard earned resources, but Ghana rather needs a serious, a committed and a forward-thinking leader who can utilise our scarce resources judiciously to the benefit of all Ghanaians.

Suffice it to state that a judicious distribution of national resources is the implementation of poverty alleviation policies such as the Free SHS.

Notwithstanding the enormous benefits therein education, it is, indeed, prudent and somewhat forward-thinking for any serious and committed leader to seek to bridge the ever widening social inequalities gap through rational distribution of national resources in the form of free SHS.

In fact, it would appear that some politicians do not care about the plight of the masses; they only scramble for power in order to pursue their vested interests.

And, as a result, we have over the years been electing dreadful economic managers who cannot see their backsides from their elbows and have only succeeded in sinking the economy deeper and deeper into the mire through corrupt practices.

In Ghana today, we have in our midst people we may call leaders. Nevertheless, we have regrettably been enduring the deficiency of true leadership for some time now. Indeed, leadership in Ghana today is lacking the quality of urgency and inspiration.

After attesting to so much scheming guiles and such frequent abuse of power, many Ghanaians have ceased believing these leaders. Unfortunately, however, no matter how sardonic we may turn out, we abdicate ourselves to the fact that we require someone to keep our nation in order.

And since we are engaged with our own lives, we are obliged to elect or appoint officials to manage the affairs of the nation. The big question however is: do we have the right leaders’ to direct us to the right direction?

Yes, we do need true leaders. Obviously, we need someone who has vision, direction, and strength to reach our goals.

And, when we are imbibed with our self-interests, be infinitesimal or cyclopean- a leader sends out a wake-up call, alerting us to seek the true priorities in life. This sense of urgency is just as important in a leader as a sense of foresightedness.

Genuine leadership, so to speak, must give people a long-term vision that absorbs their lives with meaning; it must point them in a new direction and show how their every action is an indispensable part of a positive change ahead.

I bet, the democratic country called Ghana, may not see any meaningful development, so long as we have public officials who are extremely greedy, corrupt, and insensitive to the plight of the impoverished Ghanaians.

In sum, we need a true leadership with vision and ideas, altruistic leadership devoid of corruption, greed, Incompetence and capable of transforming us into an industrialized and robust economy.

The author has 949 publications published on Modern Ghana.