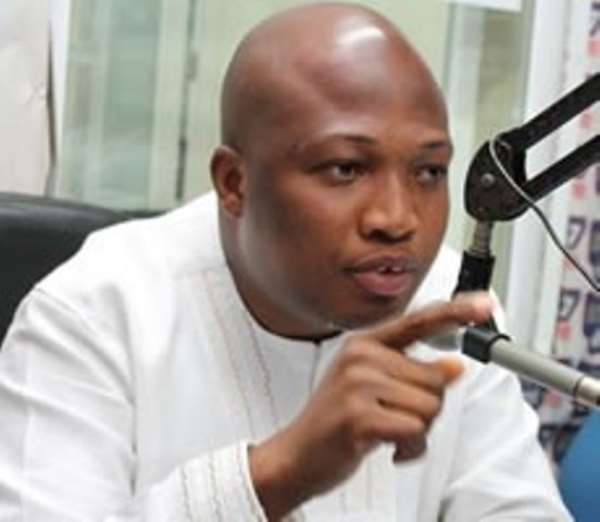 According to him, even though ARTs are gradually taking away the psychological and emotional burden couple carry due to their inability to conceive within a period after their marriage, emerging reports are that this lacuna is leading to unethical practices and the blatant abuse of surrogacy and IVF processes.

Mr Ablakwa made the call in a statement on the floor of Parliament on Tuesday, June 25, 2019.

The Ranking member on Foreign Affairs Committee of Parliament pointed out in his statement that, the seeming lack of regulation in the fertility treatment industry makes it easy for patients to be exploited and abused.

He said, in other jurisdictions, Assisted Reproductive Technologies have been boldly debated and legislated and therefore Ghana cannot afford to continue to lag behind as the dire consequences could be irreparable.

"Mr Speaker, reports are rife in the media of the abuse and exploitation of IVF patients and persons who consent to become surrogates or (rent a womb) mothers at the expense of the middlemen and women, arrangers, agencies and individuals who engage or employ their services," he stated.

STATEMENT BY SAMUEL OKUDZETO ABLAKWA, MP FOR NORTH TONGU ON THE URGENT NEED FOR LEGISLATION TO REGULATE ASSISTED REPRODUCTIVE TECHNOLOGIES IN GHANA

May I express my gratitude for the opportunity to make this statement on a matter that is becoming widespread in our country but which our society will rather prefer to keep hidden and therefore remains a forbidden subject for open discussion.

Mr. Speaker, many childless couples have found refuge and solace in Assisted Reproductive Technologies (ARTs) also known as fertility treatments which have brought them success and great joy; yet despite its existence and attendant benefits, little has been done by the Ghanaian society and this August House to raise awareness and to ensure that Ghana passes comprehensive legislation on matters pertaining to ARTs which include, Surrogacy, IVF and the proliferation of fertility clinics offering several modern interventions.

Mr. Speaker, for reasons that have been with us for centuries, society expects that a couple should have a baby within few months after marriage or that a woman must conceive naturally and bear children. That expectation is such that, when couples delay in child bearing, they become a spectre of derision and are mostly ridiculed instead of receiving sympathy and support. This becomes a burden on couples, especially the woman. We know that this results in stigmatisation and name calling, and in some circumstances a childless woman may be ostracised from her community.

Mr. Speaker, it is, indeed, the woman who faces the brunt of society pressure and questioning in cases of childlessness. Mr. Speaker, World Health Organisation (WHO) statistics show that infertility affects about 10% of couples globally, with between 20% and 46% in Sub-Saharan Africa. It is also estimated that 30% of couples in Sub Saharan Africa have primary or secondary infertility issues.

According to Geelhoed et al., 2002, the prevalence rate of infertility in Ghana is about 12% in women and about 16% in men. Only last month, Dr. Mathew Yamoah Kyei, a Consultant Urologist at the Korle Bu Teaching Hospital speaking at the Joy Business Health and Wellness Show, revealed that about 50% of Ghanaian men may fail at getting a woman pregnant.

While both men and women contribute to infertility, the prevalence rate, Mr. Speaker, seems higher in men than women and yet it is women who are mostly at the mercy of targeted stigmatization.

The good news, however, Mr. Speaker, is that over the years, science and medical research have combined to develop medical interventions that are helping bring relief to couples with infertility challenges. Sadly, these interventions have not received adequate attention from Ghanaian policy formulaters and this August House of Lawmaking. That notwithstanding, it has not stopped the increasing patronage of Assisted Reproductive

Technologies by the general public and the fact that many have found hope. Indeed stories abound out there about how families have averted potentially unpleasant situations such as divorce and abandonment.

Mr Speaker, Assisted Reproductive Technologies such as In Vitro Fertilization (IVF) and Surrogacy are now common medical interventions in our country. These services are being offered by many medical facilities to assist with conception.

IVF involves fertilization by extracting eggs or embryo from the woman, retrieving a sperm sample from the man, and then manually combining an egg and sperm in a laboratory dish. The embryo is then transferred to the uterus. Experts say the success rate of IVF treatment is about 35%-70% which makes this method most preferred.

The challenge that ought to be confronted is the absolute absence of any form of regulation whatsoever.

Already, the evidence is emerging that this lacuna is leading to unethical practices and the blatant abuse of surrogacy and IVF processes here in Ghana.

Reports are rife in the media of the abuse and exploitation of IVF patients and persons who consent to become surrogates or (rent a womb) mothers at the expense of the middlemen and women, arrangers, agencies and individuals who engage or employ their services.

Mr Speaker, in many other jurisdictions, Assisted Reproductive Technologies have been boldly debated and legislated. Ghana cannot afford to continue to lag behind. The consequences are too dire.

Mr Speaker, it would interest the House to know that in the case of surrogacy, countries such as France, Germany, Italy, Spain, Portugal and Bulgaria have laws prohibiting all forms of surrogacy.

In countries such as the United Kingdom, Ireland, Denmark and Belgium; surrogacy is allowed where the surrogate mother is not paid or only paid for reasonable expenses. Commercial surrogacy for profit is therefore prohibited in these countries.

On the other hand, commercial surrogacy is legal in some US states, and countries including India, South Africa, Russia and Ukraine.

Mr Speaker, there is also international surrogacy where couples for many reasons may opt to secure a surrogate mother from another country. This is becoming quite a lucrative industry within the international arena with countries such as Thailand, Nepal, Mexico, Ukraine, US, Russia and India becoming favourite destinations. It is worth pointing out that in this context as well, the laws of some nations do not permit their citizens to use surrogates from another country. This debate became more pronounced after the 2014 tragic case where a baby called Gammy born with Down's syndrome to a Thai surrogate mother was abandoned by his intended Australian parents.

Mr Speaker, it is time for Ghana to have it's own debate, decide on where we belong and pass our own unique legislation based on our cultural values, philosophical underpinnings and ethos to regulate the phenomenon of surrogacy and other ARTs.

Mr Speaker urgent action is required in guiding what should pertain. For example, in the UK and the US in the case of IVF, a doctor is not allowed to transfer more than one embryo per treatment cycle because of the high risk associated with multiple foetus pregnancies. In our case, a 2015 report published by myjoyonline.com on January 12, 2015, captured the ordeal of a 23-year old Denise Vanga, a surrogate mother.

According to the story, she was engaged to carry quadruplets in a riskiest enterprise for a childless couple. In addition to the risk Denise was exposed to, she was cheated, denied of her agreed entitlements and was found living in abject squalor with no legal protection.

Mr Speaker, in contrast, South Africa is a shining example in Africa.

South Africa has employed a practical and pragmatic approach and has had Assisted Reproductive Treatment Legislation since 1975 which was amended in 1998, and works in conjunction with the Assisted Reproductive Treatment Regulations of 2010. The same Country has A Family Act which deals with Surrogacy and related matters and also has the Research into Human Embryos Act of 2002.

The example set by South Africa is worthy of emulation. It encourages transparency and ensures that the rights and obligations of both patients and hospitals are clearly defined. The fact that the Fertility Industry is well managed and effectively regulated by the South African Government gives assurances to patients who avail themselves for treatment and ensures that their rights are well protected.

Mr Speaker, I wish to humbly suggest that the Health Ministry and the Attorney General's Department begin vigorous engagements with sector players including:

This intervention is needed to mitigate anticipated crises that may arise with the increasing number of fertility clinics and clientele.

We should also, Mr Speaker, begin to sensitize our constituents on the benefits and challenges of Assisted Reproductive Technologies.

Mr Speaker, ARTs have no doubt brought amazing refuge to childless couples as they strive to "be fruitful and multiply" as God admonished in Genesis 1:28; and who no longer have to suffer from the psychological effects of societal pressure when there are options, however, my plea, respectfully is that we rise up to our responsibilities as leaders to ensure that ARTs are safe and truly beneficial to all parties and the larger society.

Mr Speaker, like adoption, which is quite well regulated, it is imperative that Assisted Reproductive Technologies such as IVF and Surrogacy be legalised and a framework established to support the phenomenon.

I thank you most sincerely, Mr Speaker.