Since the June 3 2015 Kwame Nkrumah Circle disaster, conversation turns every year to how poor our drainage systems are, and to how littering and bad habits of dumping waste in waterways can be minimised to stop further tragedies of the kind happening. But it seems that the discussions and moves to take remedial measures occur only when the rain comes pouring down.

There is a culture of waiting for trouble to hit before we start naming and blaming. This culture will disappear not through the work of governments or with exertion of force by environmental activists, but through deliberate and continuous action by all Ghanaians.

Forty-five minutes’ drive north-east from the concrete city of Accra lie the green enclaves of Ayi Mensah and Peduase. Straight ahead stand the Aburi Hills, at the foot of the Akwapim-Togo Mountain Ranges, which define the landscape. At the top of the Aburi incline is the plush Peduase Lodge, built by President Kwame Nkrumah, and a stretch of highway meanders across the hillside, connecting the main towns in this area, such as Aburi, Larteh, Akropong and Koforidua, with Accra. From here, you can enjoy spectacular views of the Accra Plains.

The cool and pleasant weather has also made it a popular destination for keep-fit enthusiasts, botanists and hill walkers. This has created business opportunities, and local restaurants, hotels, groceries and petty trading outlets thrive.

On the flip side, the uncontrolled expansion of Accra has made two communities in particular ‒ Ayi Mensah in the La Nkwantanang-Madina Municipality and Peduase in Akwapim South – increasingly urbanised. There is high demand for land, and as multi-storey dream homes spring up, the hills are not being spared.

There seems to be no recourse to proper spatial planning. Houses are emerging haphazardly, even on the very edge of the top of the hill.

Long saga of damage
Five years ago, rock particles from boulders along the Ayi Mensah-Peduase portion of the Accra-Aburi road began to dislodge, eventually disintegrating and falling into the road. This road, which leads to Peduase Lodge and serves as one of the major routes from Accra to Koforidua and Aburi Botanical Gardens, became unsafe to use.

Geologists in Ghana say human activity such as stone mining, building on the rockface and even the reconstruction of the road have altered the nature of the rocks, causing them to tumble. Housebuilding has however been highlighted as the main cause of the problem.

Though the situation was brought under partial control by draping wire mesh over the rockface, the severe changes these rocks have undergone over many decades have rendered them soft, unstable and problematic for building.

The why factor
Despite several warnings about the dangers, houses have been erected in the most precipitous locations and even more are being put up.

Poor law enforcement by government officials and deliberate disregard for the law play a big role in exacerbating the problem.

The district chief executive for Akuapem South, Frank Aidoo, says the assembly is now ensuring that landowners wishing to build in dangerous locations do not get permits. Cases involving landowners who have built in dangerous places are before the courts, some awaiting injunctions.

“All these houses you see at the edge of the cliff don’t have permits,” Mr Aidoo told the Daily Statesman. “Most of them applied but we denied their applications. They then go ahead to put up the structures in the middle of the night.

“Sometimes they stop building for a very long time, but when they realise we’ve not been going there, they continue. By the time we realise, they’ve finished with their construction,” he said.

The statement implies that the local assembly is still not strictly ensuring that unauthorised buildings are not put up. Nonetheless, the indifference to authority and the law is alarming.

Such is the increase in demand for land in the environs of Peduase Lodge, Aburi and Aburi Hills that money keeps pouring in for the landowners. One landowner estimated that a plot around Peduase Lodge can sell for US$300,000. As such, despite the potential consequences, local families and chiefs rarely hesitate to sell.

“It will make the economy of this town boom if more people move here,” a pedestrian said, when asked for his thoughts about the new houses which are being built. Others to whom the Daily Statesman spoke saw no problem with building. One can take this to mean that neither do the property developers and landowners.

Living on a fault line
The rockfaces where houses have been built stand on the Akwapim Fault. The rocks here are not as compact as others, making them prone to landslides, mudslides and earthquakes regardless of the type of engineering used. Here, clearly, the prospect of falling rocks should be the least of anyone’s worries.

Landslides occur in fault zones when the soil, rocks and other earth remains can no longer hold together and give way to gravity. Building work greatly increases a region’s vulnerability to the phenomenon. The downward force of a landslide can exert itself slowly ‒ or quickly, with disastrous effects.

With houses instead of trees covering the rock surface, any type of downpour will cause a mudslide, a geologist told the Daily Statesman. He described mudslides as quick-moving portions of dirt, rock and debris that have been held to the point where they can no longer defy gravity. They are highly destructive, moving as rapidly as 35mph and destroying anything in their path. Some of the worst disasters in history have involved mudslides.

Equally, a sudden slip between any two faults in these rocks can cause an earthquake. This year, certain parts of Accra, including Weija, McCarthy Hill, Gbawe, Sowutuom and Legon, experienced a series of earth tremors. The magnitude of the last tremor in March recorded by the Ghana Geological Survey Authority was 3.9 on the Richter scale, the highest the country has experienced.

This only goes to show that houses are being built on impending disaster. The worldwide death toll from comparable natural events is in the hundreds of thousands, with millions of dollars’ worth of property destroyed each year.

It’s not too late
The struggle to prevent disaster and ensure safety of lives and property in the locality was initially fronted by the media, the then Minister of Roads and Highways and the then district chief executive in 2014. However, their actions were directed mainly towards solving the crisis of the falling rocks. Once it seemed the situation had been brought under control, discussions about the problem of housebuilding died down.

The law gives a mandate to the assembly to stop, bring down or take any other necessary measures over unauthorised buildings. It is incumbent on the central government to provide adequate logistics and resources to the local assemblies to prevent further building work.

Proper sanctions must also be meted out to people and government personnel who turn a blind eye to the law for their own gain. And the media must help to raise awareness of the problem, educate the public and scrutinise the government and people impartially until change is attained.

Though these catastrophes can occur naturally and efforts to forestall them can be futile, human activity can trigger or hasten the process. Pressure on the land in a fault zone, which over the years has already caused the rocks to fragment and slide, can be counteracted by using vegetative cover to hold the soil together. Yet Aburi’s forest cover is also being destroyed. Without the root systems of trees, bushes and other plants, the land is more likely to give way to gravity. 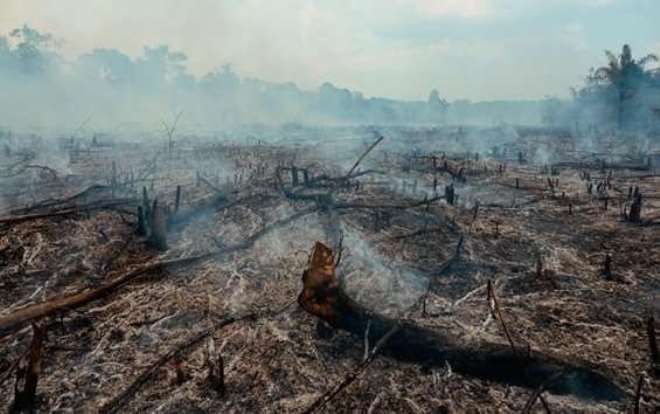