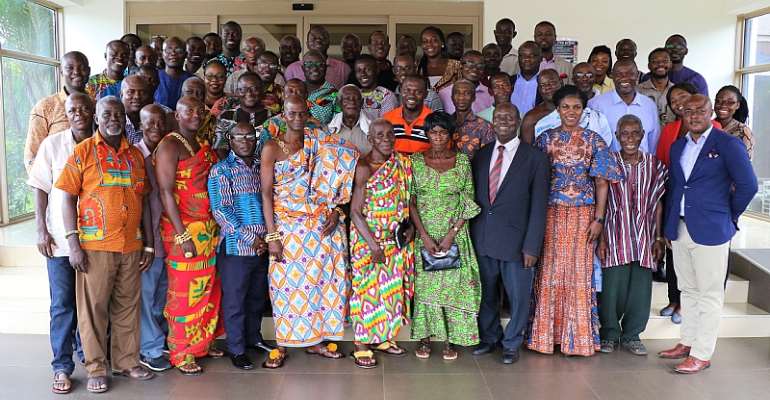 Tenant cocoa farmers and the land committee of the Sefwi Wiawso Traditional Council have for the first time met to build consensus over provisions in a proposed lease agreement that has generated controversy between the two parties.

The lease agreement is an integral part of efforts to create sustainable cocoa land tenure and ownership security.

Tenant cocoa farmers, who are mostly non-natives, resisted moves by the traditional council to implement a new land lease agreement without their consent.

The dispute slowed down efforts towards cocoa rehabilitation and intensification efforts in the Sefwi Wiawso Traditional Area, which contributes the highest production to Ghana’s cocoa industry - the bedrock of the country’s economy.

In 2016, the Advocacy for Change project, implemented by Solidaridad West Africa with funding from the Dutch Ministry of Foreign Affairs, stepped in to facilitate open discussion among the parties and other stakeholders to find mutually agreed solutions for the recurring standoff that dates to the 1960s.

The project seeks to engage national and local level cocoa actors to discuss and build consensus on policy and regulatory framework for enhancing standards that support adoption of sustainability interventions in cocoa landscape.

“It has been difficult bringing the two parties together for a dialogue”, says Eric Agyare, Coordinator for the Advocacy for Change project”. First, we had to deal with suspicions and the unwillingness of both parties to shift positions and accommodate each other”.

Solidaridad West Africa supported both parties with intensive capacity building on legal and governance perspectives on cocoa land tenure and ownership security and the need for land documentation. This clarity contributed to the parties’ agreeing to participate in the renegotiation of the land lease agreement.

Tensions have reduced and stakeholders are now willing to engage and shift positions toward finding lasting solution on land documentation and ownership.

“We consider today’s roundtable meeting a major achievement given the contestations that confronted us. We appreciate the facilitation by Solidaridad West Africa that has resulted in this outcome”, says Nana Agyei, President of the Sefwi Wiawso Settler/Tenant Farmers’ Association.

“As landowners, we are satisfied with the outcome of the stakeholder engagement so far. The Solidaridad intervention has helped us to move from our entrenched position to one of consensus.”, says Nana Kwao Asante Bediatuo, Chairman of the Land Committee of the Sefwi Wiawso Traditional Council.

It is expected that the outcome of the stakeholder engagement would provide adequate basis for developing an appropriate cocoa land tenure and ownership security that would promote a sustainable cocoa industry in Ghana.

The Advocacy for Change project is also expected to contribute to minimize contestations and promote good relationship between landowners and settler farmers. This will create an enabling environment that drives major climate change and cocoa sustainability interventions in the Sefwi Wiawso Traditional Area, with the possibility of scaling up to other cocoa farming areas.