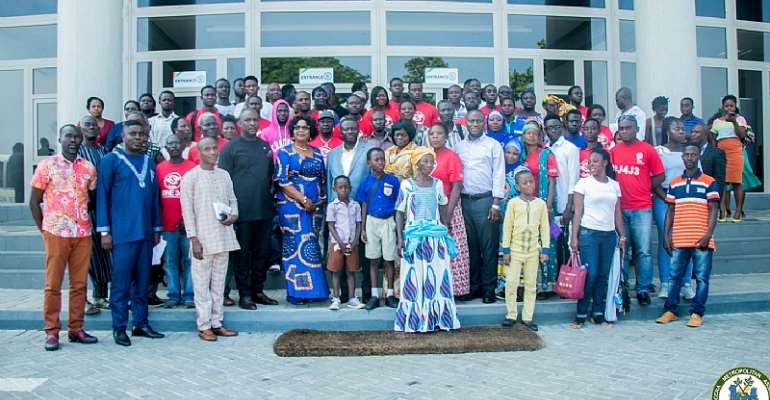 The Government of Benin has donated an amount of $200,000 to bereaved families and survivors of the catastrophic June 3 disaster which occurred at Circle, four years ago.

According to the Beninese Ambassador to Ghana, Madam Francois Martin Dossa, her country was saddened by the unfortunate incident that happened in Ghana and extends her country's commiseration to victims hoping such deadly incident(s) does not occur in any country.

Delivering the donation at an epigrammatic ceremony held at the Accra Metropolitan Assembly’s ultra modern city hall, Deputy Director-General of National Disaster Management Organisation (NADMO) as well as Chairperson for the Disbursement Committee, Mr. Seji Saji said “The Committee decided to support 15 families of the deceased who were yet to be supported with GHȻ10,000.00 each, 40 severely injured persons with GHȻ10,000.00 each, 28 persons who suffered minor injuries with GHȻ8,000 each as well as support Mr. Kasim Suraj with GhȻ40,000 to undergo surgery.”

He added that the GHc216,000 surplus will be used to pay for extra bills of victims of the June 3 disaster undergoing medical care in the various hospitals.

Ghana was left to a standstill when it experienced a worst disaster. It all started with at heavy downpour in some parts of the Nation’s capital. That evening, scores of people were seen running helter-skelter as the rains seemed not to stop. While some hid under building and others stuck in both commercial as well private vehicles, a few took to the state owned Goil fuel station at the Kwame Nkrumah Circle but the unfortunate happened the station exploded during the downpour killing over 160 people whiles others sustained various degrees of burns and injuries.

Receiving the donation, the Metropolitan Chief Executive of the Accra Metropolitan Assembly (AMA), Mohammed Adjei Sowah advised general public to be cognizant of the surroundings and warned them to refrain from the unlawful, indecent and inappropriate disposal of refuse into drains to avoid such disasters.

He said "Our actions and inactions are major contributions to the challenges we are confronted with today. People who dump waste into drains turn to forget that their actions may lead to disasters such as the June 3rd. As we meet here today, let us remind ourselves and say ‘Never Again’ will we act irresponsibly and recklessly as citizens by dumping waste into the drains."

Some beneficiaries expressed their gratitude to the Benin government, Accra Metropolitan Assembly and NADMO for making possible the payment.