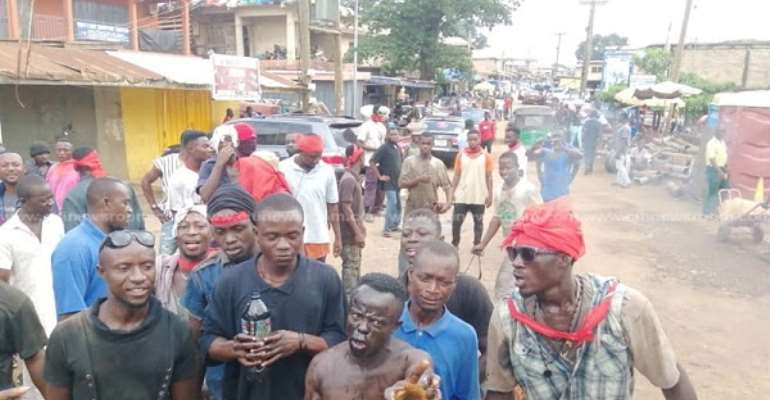 Having watched a Nigerian professor of English in a video that is in circulation, it seems we are blowing his comment out of proportion. The first thing that come in mind was his audience. He was speaking to Nigerian community, to sum up, his main concern was how Nigerians can carve good image for themselves as a nation, and not accepting the status quo (criminal tag), after all, Ghanaians are not saints. He was not instigating any of his audience to cause commit crime or violence whatsoever, he was telling them (Nigerians) as a concern citizen that Nigerians can equally be of good behaviour as their Ghanaian counterparts. Obviously, I will not deny that there were some exaggerations in his speech. For instance, for him to say that Nigerian Universities are better than Ghanaian ones, is purely subjective and hyperbole. Of course, I do not expect people to use their ‘left finger as pointer to their village’ and taking his listeners into considering, I see nothing wrong. I do not see any criminality attempted or committed. In addition, it does not require his arrest either, something one must only listen, after all, information he was peddling around are untrue and carries no merit. Nigerian media cannot tarnish Ghana’s image as purported by this professor, because Ghana’s media can match them because ours have credibility. I can only see a harmless professor who is venting his frustration.

There are many who may disagree with my views, considering many crimes committed by Nigerians in recent times in Ghana (as reported in many news outlets). I cannot blame Ghanaians for harsh utterances issuing against Nigerians living in Ghana, but I will call for an utmost decorum. The truth is that emotions are high already, therefore, any attempts to flame passions can easily escalate. I will call on the stakeholders especially the media to be circumspect with their reportage in order not to fuel the flame of passions. We want peace for all people living in Ghana, so that businesses will thrive for betterment of all. I will appeal to the police and the Peace Council in Ghana to intervene and calm the tensions.

Ghanaians should be careful not to destroy the good relationship between these two countries that date back to many years. Nationals of these two countries have come far to allow few misunderstandings to separate them. We have shared many goals and similarities, and many intermarriages have taken place between these two nations. We should not forget that, there are Ghanaians who equally commit crime in Nigeria and there are good numbers of Nigerians too in Ghana who are doing honest and legitimate businesses. However, that is not a justification for Nigerians be allowed to commit crimes on Ghanaian citizens, we should fight crimes with all our abilities. I will suggest that, those in authorities should equip our security forces to deal with crime, but not to target a nationality. Repercussions of crime on the economic activities are huge; no investor would like to invest in an environment that crime thrives. The laws of the land should be allowed to work and punish criminals, and that under no circumstances should the people take the law into their own hands. Innocent people perish whenever citizens decide to carry out instant justices.

I am hearing from some section of traders that, there is a statutory instrument in Ghanaian law that prohibits foreigners from engaging in retail trade (foreigners can only engage in wholesale trade in Ghana). Some aggrieved traders have even gone to the extent of given government ultimatum to either enforce such a draconian law or abolish it completely. Sometimes we cloud our minds with emotions and easily forget to face reality that this world has become a global village. What makes us think that it must be easy for government to enforce this law, because the truth is that there are many Ghanaians within the Economic Community of West African States (ECOWAS) and other parts of the world who depend on retail trade. I will suggest again that, citizens should rather demand accountability from their leaders who collect taxes from these traders but do not channel them into social interventions (funds to support local retail industry) that will make live better for them. People should exercise restraint and face reality at least for ones, not all enacted laws are meant to be enforced, there are many laws that must remain in statutory books because its implementation would rather make lives unbearable (debatable).

A colleague takes a different view to my submission, according to him, my submission sounds as if Ghana is at par with most developed countries. He argued that, the courts work somewhere, but in some jurisdictions, it is a different ball game altogether. Especially, where the massages of the people do not respect law enforcement agencies, the outcome will be nothing but looting and vandalism. He raised a varied argument that, Ghanaian orientation as country is different and their path to developing must not necessarily follow the western world pattern. And that if Ghanaians describe their challenges wrongly, wrong measures would be adopted to curtail them. That of course, is a credible argument, but in matters of this nature, I will suggest that we follow a path of the western world instead of taking to a path of unknown.

To conclude, I will urge Ghanaians to follow the law and allow the elected leaders to explore best possible options. The truth remains, you just do not enforce law that target a group of nationals and not expecting other nation not to retaliate. Civil societies should educate the masses of how policies work for the preservation of diplomatic relations. Countries need each other to make progress, be it trade or security intelligent sharing.

Akufo-Addo commences process to remove Anin-Yeboah over $5m ...
31 minutes ago