Mahama had no hand in Ghana’s economic woes: Send him back to Jubilee House! 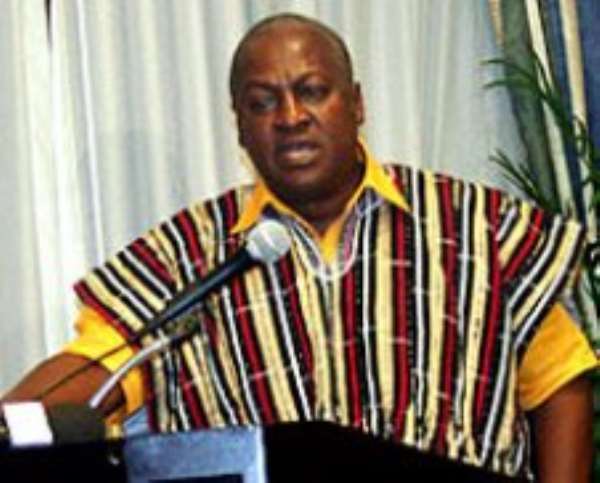 We have unfortunately been witnessing unbridled reactive emotional responses from the diehard supporters of NDC ever since they lost the 2016 general elections to the NPP.

The NDC loyalists have been going through a process comparable to Dr Elisabeth Kubler-Ross’s stages of grief.

Dr Elizabeth Kubler-Ross developed the grief model in the 1960s with the view to explaining the grieving process.

The grief model has since been widely utilised as a method of helping people to understand their reactions to significant change or upheaval.

Take, for instance, Dr Kubler-Ross grief model posits that a terminally ill patient would normally progress through five stages of grief when informed of their illness.

She further proposed that the model could be applied to any dramatic life changing situation such as the NDC’s 2016 humiliating election defeat and the subsequent histrionics.

According to Dr Kubler-Ross, during the denial stage, individuals, like the NDC faithful, who are grieving over their loss, are often unable or unwilling to accept that the loss has actually taken place.

In other words, the grieving individuals, such as the NDC loyalists, would feel as if they are experiencing a bad nightmare, and would often hold an elusive conviction that the loss is unreal.

Dr Kubler-Ross thus explicates that when individuals, like those in the Umbrella fraternity, who are grieving over their 2016 humiliating election defeat, have gone through denial stage, and have accepted the fact that the loss has occurred, may enter into the anger phase. For instance, they would become extremely angry at the loss and would thus throw tantrums to evince their pains.

In the bargaining phase, according to Dr Kubler-Ross, individuals in the grieving mood, such as the NDC supporters, would relentlessly beg their "leaders’" to do something about the defeat, saying things along the lines like, "We’ll not vote if you failed to bring “the former president” (or Mahama ) back ".

Interestingly, however, Dr Kubler-Ross asserts that once it becomes crystal-clear that anger and bargaining are not going to alter the loss as in the case of the NDC diehard supporters, individuals grieving, like NDC faithful, may then enter into a depression stage where they come face-to-face with the reality of the loss and their own irrevocable infelicities that more or less contributed to the loss.

During the depression stage, according to Dr Kubler-Ross, the grieving supporters may weep bitterly behind the scenes, and may experience sleep or eating habit changes, or withdraw from other relationships and activities while they process the loss they have suffered.

Some followers may also blame themselves for having caused or in some way contributed to their defeat, whether or not it is justified.

Lastly, according to Dr Kubler-Ross, individuals would enter into a stage of acceptance when they have overcome their initial grief emotions and are able to accept that the loss has occurred after all and nothing can be done about it.

To be quite honest, some of us cannot get our heads around how and why former President Mahama and his teeming supporters are fighting tooth and nail to reclaim the presidency barely 30 months after being voted out of power by discerning Ghanaians due to his dreadful errors in judgement amid massive economic meltdown.

Strangely, however, Ex-President Mahama is moving up and down the country and upbraiding President Akufo-Addo who is prudently fixing the unprecedented mess left behind by the erstwhile NDC administration.

After all, wasn’t the same former President Mahama who once claimed that Ghanaians have short memory?

Yes, former President Mahama referred to Ghanaians as a bunch of amnesia sufferers (emphasis mine).

But contrary to former President Mahama’s sophistic assertion, discerning Ghanaians have overcome their memory loss, if the 2016 election is anything to go by.

Let us however face it, not many Ghanaians were much pleased about the GH12 million import tax evasion by the sibling of former President Mahama, Ibrahim Mahama. Indeed, if not the Honourable Agyapong’s whistling blowing prowess Ghana would have been GH12 million worse off.

Apparently, following the NDC’s humiliating 2016 election defeat, the Honourable Kennedy Agyapong came out and told Ghanaians that former President Mahama’s brother, Ibrahim Mahama, had been evading import taxes over the past few years.

As a matter of fact, Ghana under the erstwhile Mahama administration went into economic meltdown, which regrettably brought to pass the harsh socio-economic standards of living.

It is, therefore, quite bizarre that the NDC loyalists who are currently enjoying uninterrupted electricity, low inflation, tax reductions, favourable economic growth, gargantuan savings on free SHS amongst others, are gleefully clamouring for the return of Ex-President Mahama and their beloved NDC.

During his calamitous administration, the vast majority of Ghanaians struggled to make a living or eke out an income.

And, despite the harsh socio-economic standards of living back then, President Mahama and his clamorous apologists kept trumpeting their vague rhetoric , political insobrieties and meaningless slogans: ‘Mahama Tuaso’; ‘We care for you’; ‘people matter, you matter’; ‘we are transforming lives’.

The vociferous NDC communicators could not have solicited votes from Ghanaians who were extremely aggrieved about President Mahama’s freebies to all sort of people, including Madam Akua Donkor of Ghana Freedom Party (GFP) of two four wheel drive cars and a luxury bungalow (estimated to cost a staggering $470,000) for no work done.

Verily, no one would have listened to the NDC’s electioneering campaigners when no meaningful efforts were put in place to stop the numerous sleazes and corruption.

The Mahama loyalists must accept the fact that discerning Ghanaians could not have forgotten the terrible errors in judgement which culminated in economic hardships amid the unbridled business crippling ‘dumsor’.

By and large, the reflective observers are of the view that the successive NDC governments have proven to be worst economic managers who can never improve upon the socio-economic standards of living of Ghanaians.

Unfortunately, however, politics has ceased being the noble profession it used to be. Needless to stress that politics these days has been dominated by wolves in sheep’s clothing.

It would thus seem that the vast majority of the modern day politicians ostensible preoccupation is to manipulate their way to power and pursue their vested interests.

More Feature Article
ModernGhana Links
Social Media Addiction And Productivity
Young Positivist Writes: Y3te Sika So Economy!
The New Ghana's LGBTQ+ Bill A Spat On Human Rights
Exactly 183 Years Today, Badu Bonsu II Was Killed At Butre And The Head Taken To The Netherlands For Curiosity Sake
These Retarded MPs Must Be Voted Out of Parliament Pronto
Take Care, For Anti-Covid Fake News Is All Over The Place!
Damsel Foundation Executives Should Find a Better Name and Something Better to Do
Afghanistan, Failure and Second Thoughts
Nigeria: If Only AGF Malami Would Learn To Talk Sparingly
TOP STORIES