Buhari Group Felicitates With Kingibe At 74 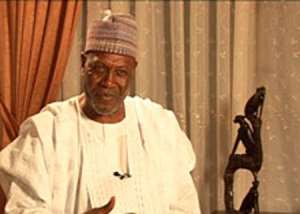 The leadership of Buhari For Better Tomorrow Movement (BFBTM) is felicitating with the former Secretary to the Government of the Federation, His Excellency, Ambassador Babagana Kingibe on the occasion of his 74th birthday anniversary.

In a good will message signed by the group's deputy national publicity secretary, Ms. Millicent Edwin, the group noted that Ambassador Kingibe is a man who has made the nation proud at different times; starting from when he became Nigeria's Ambassador to Greece in 1981 at the age of 36 to the moment he became the symbol of our democratic struggle which culminated to his nomination as the Vice Presidential Candidate of the defunct Social Democratic Party (SDP), Ambassador Kingibe had always stood for national interest in all his public outings even at great personal discomfort.

Therefore, there is no better way of celebrating a man who loves his country beyond measure than openly identifying with him on the joyous moment of his life as he turns 74.

While we pray for God's protection, blessings and guidance upon his life and family, we also implore him not to give up in his love and support for the government and people of Nigeria.