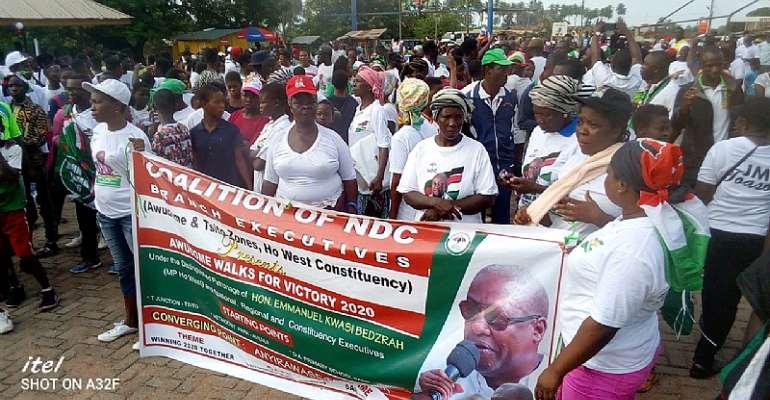 The Member of Parliament for the Ho West Constituency, Mr. Emmanuel Kwesi Bedzrah, has challenged his constituents to oust the Nana Addo led NPP government in next year's general elections.

He says the Akufo-Addo government lured the voters with lofty promises prior to the 2016 elections and have failed woefully to deliver.

Addressing a gathering of party folks at Anyirawase on Saturday after a health walk, he noted that government prior to coming into office, promised job creation, quality education and development, however, not much has been done in these areas.

"The NPP in opposition tagged the Mahama government incompetent. They lied to Ghanaians on the state of the economy and deceived Ghanaians with so many promises; 1 Village 1 Dam, 1 District 1 Factory, job creation among others. Unfortunately, they have done just nothing yet in fulfilling these promises", he said.

The lawmaker continued, "Road projects started by the previous administration has stalled; Abutia-Juapong road, Bame-Dzolokpuita roads that we started have been left unattended to. As for the Eastern Corridor road, I don't want to talk about it.

"Today, I challenge you to get ready and push out this government in 2020 because we were deceived and the President and his people are sinking the country", he added.

Mr. Bedzrah also accused government of not being truthful to Ghanaians regarding borrowing and the country's debt stock.

"When we were leaving office, the total debt of this country stood at Ghc120 billion, and that's what we have accrued since independence. Nana Addo and his government, just after 2years in office have added a total of Ghc80 billion to our debts. That's how untruthful this government has been".

The lawmaker took the opportunity to entreat the gathering to take the limited voter registration exercise serious and drive persons eligible to the centers for the registration.

"To get this government out of power for its poor performance, you need to get yourself onto the voter's register. I therefore entreat you, most especially those of you at voting age, to go out to the registration centers and get yourselves registered.

"I want all party members to commit themselves to the exercise and help drive people to the centers for the registration," he stated.

The health walk, dubbed "Awa Walk" was organised by the Tsito and Awudome zones of the Constituency on the theme: Winning 2020 Together, and was attended by the Bono Ahafo Regional Youth Organizer, Efo Worlanyo Tsekpo, Elikem Kotoko and some other members from the national level.