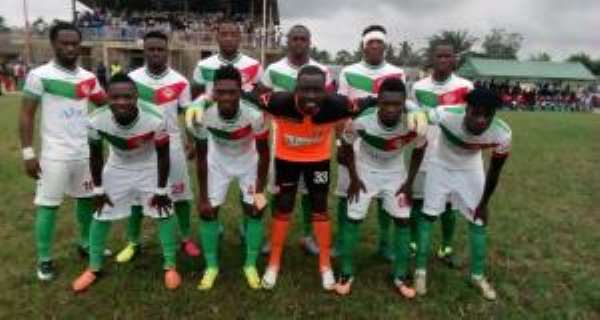 Angry supporters of the Nzema-based premier league club at Aiyinasi in Ellembelle District of the Western Region, Karela United have vowed not to attend the team's home soil to watch their matches again.

Asante Kotoko have earned the right to represent Ghana in next season's Caf Champions League after beating Karela United in the final of the Special Competition on Sunday.

Asante Kotoko managed to win 4-1 on penalties against the Aiyinase side after a 1-1 stalemate in regulation time.

It was Karela who netted first on the day through Emmanuel Osei Baffour, whose curling shot from inside the box beat goalkeeper Osei Kwame.

Kotoko had to wait until the 71st minute to level the score when Abdul Safiu Fatawu converted a penalty after the attacker was tripped in the penalty box.

Without any further goals, the game moved straight into penalties after 90 minutes without extra time, as per the competition's regulations.

In the shootout, Karela missed their first two kicks as Patrick Yeboah and Ampem Dacosta could not find a way past goalkeeper Osei.

And although Agyemang Yeboah subsequently converted for the away side, Ismail Abdul Ganiyu, Daniel Darkwah, Fatawu and Naby Laye Keita slotted in all four of Kotoko's kicks to seal a 4-1 win.

Next season, the Porcupines will hope to better this term's performance in Africa, where they reached the group stage of the Confederation Cup.

In the absence of the Ghana Premier League, which is set to return next season, the Special Competition was organised to "keep clubs busy" and to select a representative for the Champions League.

Immediately after the game, some aggrieved supporters who expressed their disappointment at Aiyinasi, said they will never support their team (Karela United) whenever they are playing at home.

They told this Reporter that they insisted that the final game should not be playing in Kumasi but their management did not listen to them.

The Normalisation Committee initially picked Accra Sports Stadium as the venue for the finals but the Management of Karela United decided to play the game at Kotoko's home soil (Baba Yara Sports Stadium).

Before the finals, Karela United traveled to Obuasi to beat AshGold by a lone goal to book their tickets to the finals so they were thinking that they could do same to the Porcupine Warriors in Kumasi but they failed.

They added that "When we had Karela United was going to play the finals in Kumasi instead of Accra, we kicked against it and knew we can't beat them in Kumasi but our management didn't listen to us and we are telling them that from today going we will not waste our money on them again, we will not even to park to watch their matches again".

The seized the opportunity to commend the players for the beautiful game they played at Baba Yara Sports Stadium on Sunday.

They remembered the owner of the team, the late David Brigidi that if he was alive like he won't take such a bad decision.

Karela United was formed in October 1st 2013, formerly known as Metro SC. Based in Nzema Aiyinasi in the Elembelle District of the Western Region.

Pride & Passion is the team's slogan.