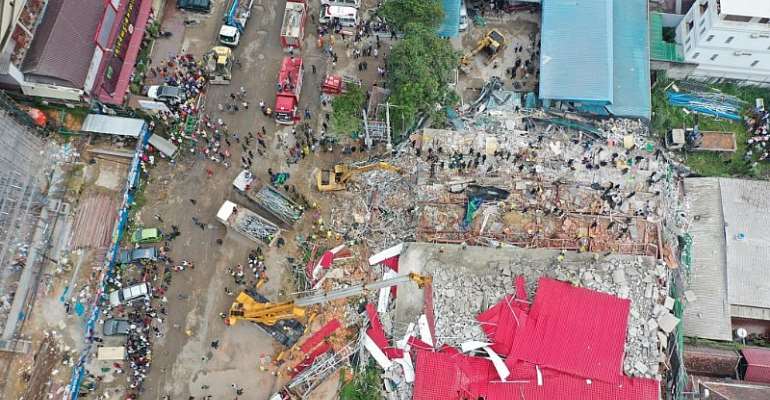 Cambodian rescuers have found two survivors in the rubble of a Chinese-funded building site, two days after the seven-story condominium under construction collapsed, killing at least 28 workers and injuring dozens more.

The construction workers were sleeping on the second floor of the building in Sihanoukville, a Cambodian beach town, which also served as their accommodation while they were working on the site.

Sihanoukville has a number of Chinese-funded projects that were constructed to accommodate tourists.

Authorities said more than 80 percent of the rubble had been removed by Monday morning. The Chinese Embassy to Cambodia expressed its condolences and said it would be sending help to the disaster site, asking Chinese companies working in Cambodia to send diggers and heavy equipment.

On Sunday, Prime Minister Hun Sen visited the building collapse and spoke to local and regional officials. He posted on social media that he had asked for provincial Governor Yun Min's resignation, which he said was forthcoming.

The Cambodian Labour Ministry said 30 workers were at the building site when it collapsed, but one construction worker reported 55 to 60 inside the building.

Worker Nhor Chandeun told local media that he was sleeping on the premises with his wife when they heard a loud noise before the building began to vibrate and then fell down around them. They were trapped for 12 hours before rescue workers found the pair.

The prime minister announced that he was creating a committee to oversee the quality of Chinese building projects there. Regional officials said that four Chinese nationals linked to the construction site have been arrested while authorities investigate.

The Chinese Embassy "supports a thorough investigation of the accident and necessary measures by competent Cambodian authority in accordance with the law," it said in a statement released Monday.