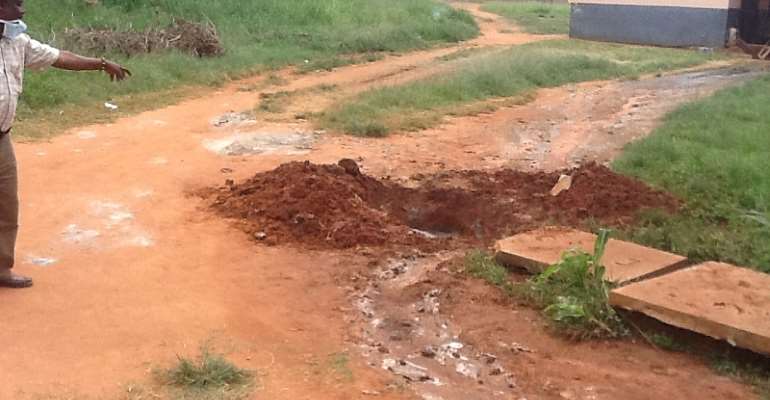 Staff and pupils of the University of Ghana Basic School near the Legon Hospital in the Ayawaso West Woguon Municipality are finding it difficult to cope with the stench emanating from a sewage leakage.

The school authority said the leakage is not only threatening their health but their dignity as the stench from the sewage has left teachers and pupil gasping for fresh air.

The sewage from the Legon Hospital is said to have been leaked since June 15 yet nothing has been done about it.

Teachers who spoke to Modernghana said, they have no option than to run to a place where they can gasp for fresh air in order to avoid choking themselves.

Mr Victor Lee, a class teacher said the liquid waste is mixed with used tissue flowing through the compound of the school, where the school children play hopscotch.

Another teacher identified himself as Kwabena Opoku Asemsro said, they reported the incident to the University authorities but fell on deaf ears until some media houses picked the matter up before the Estate Department rushed in.

He said they do not know what had caused the leakage but believed heavy pressure from the septic tank causing the pipes to burst. Though the leak was addressed, the teachers also believed an over aged infrastructure had to be replaced to avoid similar incidents.

"This leakage has happened for a week now. We call the University authority (Legon ) but they never mind us. It was after the media captured in the news and they that they rushed and put some concrete on it. It was very bad and the stench has taken over the whole school," Mr Lee said.

The teachers fear if the leakage is not addressed, they have no option but to halt classes to save staff and pupils from health implications.

"We are helpless here because we cannot leave the school like that, we have nowhere else to go. It’s unhealthy for us the teachers, the children and for others in the area,” a teacher identified herself as Jemima Owusu said.

Meanwhile, the Minority Members on the Health Committee of Parliament has served notice of visiting the scene to appraised themselves on the situation.